After the McLaren Formula 1 team employee was found, on Thursday evening, to have tested positive for coronavirus, triggering that team’s withdrawal, the 2020 Australian Grand Prix was in obvious peril.

At that moment, Ferrari, Renault and Alfa Romeo were privately adamant they would be withdrawing.

At this point, the FIA was not in a position to cancel the event autonomously, as explained by a spokesperson from the governing body: “For us to cancel it on our own would require F1 to tell us less than 12 cars are available.

“But other than that, or from the local health authorities, the FIA cannot cancel because there are too many commercial agreements that in cancelling, the liability would come back to us.”

The health authorities did not at this stage consider it necessary to cancel the event. The FIA did not wish to make itself liable to commercial damages.

The organisers were potentially looking at refunding those who’d bought tickets and so wanted to run the event if deemed safe.

Liberty is paid $55million by the organisers for the grand prix and so obviously would have preferred to have found a way of holding it.

The situation was further complicated by the fact that the Victorian state pays for the race, which is not therefore purely a privately-funded event. “Cash is king,” as Lewis Hamilton – clearly uncomfortable about F1 being here at all – summarised.

So without anyone instructing the teams to stop, it was up to them to take the lead if they wished to do so, as a duty of care to their employees.

If enough of them voted to pull out, they could inform the FIA they had less than 12 cars available. Simple? Actually no. Because there were some teams that wished to continue. 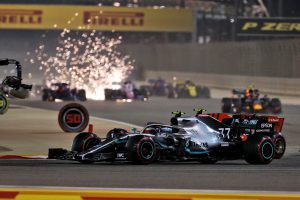 So as the team principals’ meeting was convened on Thursday evening it had to go to the vote.

Mercedes Corporate said it was Wolff’s call how to vote, but gave its own views. Wolff returned to the meeting, having changed his position

In the cancel corner were Ferrari, Alfa Romeo and Renault, with McLaren joining them as already having withdrawn.

Voting to run on Friday, with a locked-down paddock and further precautions, were Red Bull, AlphaTauri, Racing Point – and Mercedes.

Two teams – Williams and Haas – abstained. That put the score at four-apiece. In such a situation, the casting vote comes down to Liberty’s managing director of motorsports Ross Brawn. Brawn favoured running Friday as normal and taking a view at the end of that day.

As things stood, after two hours of negotiation and some highly emotional exchanges, the event was set to continue, with no objection from the health authority or the FIA.

At which point Toto Wolff took a phone call from corporate Mercedes in Stuttgart. Corporate said it was Wolff’s call how to vote, but gave its own views.

Wolff returned to the meeting, having changed his position. For reasons of duty of care to its employees and in solidarity with McLaren, he voted against continuing.

The teams were now in a position to request to the FIA that it cancel the event, regardless of Red Bull, Racing Point and AlphaTauri wishing to continue. 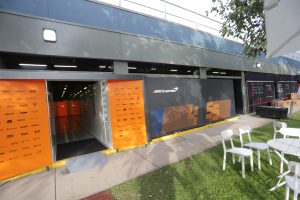 But there was a further complication, very evident the dawn of Friday morning as the two-seater F1 car started up and began giving its corporate rides around the track, as per the schedule.

Spectators turned up, as they’d been advised to, only to find they were not allowed through the gates

The organisers – the Australian Grand Prix Corporation – presumably for reasons of insurance, could not announce the event as cancelled without the Victorian state doing so. Which it was not doing.

Who blinked first in making the announcement? It was the most bizarre situation.

Which left a period of about three hours where spectators were being advised that the event was continuing as scheduled. Marshals were told to turn up at their posts, as normal.

Yet the teams – seven of them at least – were already beginning to pack up and Pirelli had told its employees to remain at their hotels.

Sebastian Vettel and Kimi Raikkonen had already flown out. Teams trying to get their garage equipment packed up were told they could not use the pitlane for packing – as it was needed for the organiser’s support races.

Meanwhile the hardline ‘let’s race’ teams were continuing with their normal programme until advised to do otherwise.

“We have our cars here, our drivers, our mechanics. We’re doing pitstop practice now,” said one.

Spectators turned up, as they’d been advised to, only to find they were not allowed through the gates.

An announcement from the organisers then advised it would be a spectator-less event, still inferring that there would be an event, even when it was already decided there wouldn’t be. It was just a game of Mexican stand-off about who would announce it.

Eventually the teams forced the issue by publicly stating they had requested the FIA cancel the event. The FIA duly followed up a few minutes later with the confirmation it was cancelled.

So what happens next? The chances of a Bahrain Grand Prix next week look remote.

Ferrari, Renault and Mercedes will not attend – and will not supply engines. Which would leave only the four Honda-powered cars.

The entry restrictions in Vietnam make that look impossible. The current public gathering restrictions in Europe make Holland and Spain look unfeasible. Monaco doesn’t pay for its race – and so could be cancelled without financial penalty to Liberty.

Baku in early June is set to be the next race, as things stand. In the meantime, the summer break will effectively be brought forwards to now – and an attempt will be made to reschedule the missed races, using up the original summer break. Virus-permitting of course.