The 2021 Aston Martin Formula 1 car will feature a new monocoque design, with the ex-Racing Point team opting to spend its development tokens on a modified survival cell.

As a result of the COVID-19 pandemic, F1’s planned overhaul of the technical regulations was put back next year with the 2020 cars largely being carried over into this season thanks to a freeze on designs.

However, in addition to aerodynamic development remaining free, teams are permitted to spend their two development tokens to change limited parts of their choosing.

The technical regulations split the survival cell into two parts, one in front of and one behind the notional line ‘B-B’ that acts as the divide roughly in line with the steering wheel. Aston Martin will have changed the design of one of these sections compared to the monocoque that was homologated after the first race weekend of 2020 given two tokens are required for each part.

In an interview with Sky Sports F1, Aston Martin team principal Otmar Szafnauer explained the philosophy of the car remains the same as last year, but despite that it is still largely a new machine.

“We didn’t have the normal latitude of development that we usually do, so from a philosophy standpoint running a low-rake car, that stayed the same,” Szafnauer told Sky Sports F1.

“However, having said that, even though we didn’t have a latitude for development the FIA did make aerodynamic changes and significant changes to take downforce away and slow us down. And because of that we had to redevelop the whole thing.

“This is the first time that a carryover car has had many of its parts new, so although the philosophy is carryover we will still have a lot of new parts on the car, a lot of new aerodynamic development, even a new chassis for us as well.

“Although the car will be similar to last year, it’s predominantly new.”

Aston Martin also has the benefit of being able to upgrade any 2019 non-listed parts from Mercedes it used last year to 2020 specification without spending tokens.

This is permitted in the regulations and can also benefit AlphaTauri with its Red Bull relationship, although Haas cannot do so because it already used 2020 Ferrari components last year.

This means it is able to upgrade to the 2020 Mercedes rear suspension, which was swept back and reconfigured as part of a major redesign that improved the airflow – and therefore potential for downforce generation – to the rear of the car.

The team finished fourth in the constructors’ championship last year in its Racing Point guise and Szafnauer has set his sights on going one better in 2021.

It was in close contention for third place last season, eventually losing out to McLaren after a disappointing Abu Dhabi Grand Prix, with Sergio Perez retiring early and Lance Stroll finishing 10th. 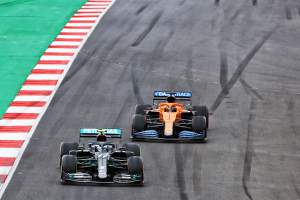 Szafnauer added that the package of four aerodynamic rule changes – cutting back the floor, outlawing the slots in its outer edge, restricting the vanes in the rear diffuser and restrictions on winglets on the rear brake ducts – potentially could be decisive in the battle for third in terms of who adapts most effectively.

“It will be the target for us,” said Szafnauer when asked if third would be the objective.

“I don’t think it will be easy, we’ve got some formidable competitors there. Ferrari will work hard over the Winter to make sure they do better than last year, McLaren get a new powertrain, the same one that we have, and I’m sure they did that for reasons of competitiveness.

“And then there’s some driver movements as well, so we’ll see how all that pans out. So there are some differences.

“And the FIA have big rule changes, they took out big chunks of the floor for us to lose downforce and depending on how the teams claw that downforce back, that’ll have a big impact on performance as well.