Aston Martin Formula 1 team boss Otmar Szafnauer has indicated news of Sebastian Vettel’s future is imminent amid speculation about the delayed take-up of his option to continue in 2022.

Vettel moved from Ferrari to Aston Martin in what was billed as a deal for 2021 “and beyond”.

His contract has an option to include 2022 and the team wants its marquee signing to remain on board but so far Vettel has not committed.

Ahead of the Italian Grand Prix, Vettel remained elusive on the subject. When asked about the delay on Thursday he said: “Not much to add really. I think generally I’ve never really talked much about contracts.

“It does also say in the contract you’re not supposed to talk about it so I’m afraid I can’t give you much more insight.”

The situation has prompted suggestions Vettel has fallen out with the team and could be considering retiring at the end of the year.

However, Szafnauer says it is “absolute 100% nonsense” that there is a rift between the team and its star signing, and that neither party has a “Plan B” for next year.

“There is absolutely zero friction,” said Szafnauer. “Ask him and I am confident he will say, he absolutely loves it here. 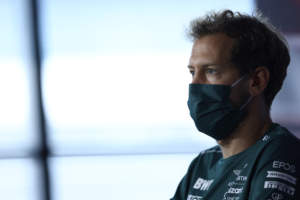 Why Vettel’s protest support is impactful not hypocritical
Read more

“It’s just a matter of working out some of the details.”

Vettel has finished on the podium twice in his first season with Aston Martin although he lost the second because there was not enough fuel in the car to complete the mandatory post-race sample.

The 2021 season has been trickier than expected for the team after it suffered a performance drop with the new floor rules introduced this year.

Aston Martin has significant investment under Lawrence Stroll’s ownership and Vettel’s arrival plus the team rebranding this year after two seasons as Racing Point were geared towards becoming an operation capable of fighting for world championships over the coming seasons.

Szafnauer said he does not think Vettel is debating leaving F1 at the end of this year and insisted his contractual situation is “just about getting the details right and there are some things in a contract where both parties have the ability to choose – that in itself just tells you got to negotiate some of this stuff before both of us sign”. 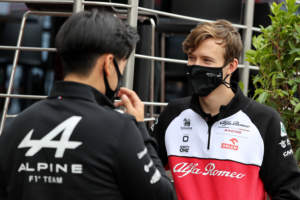 “We really like him, he likes us. We’re now in the detailed discussions of going forward.

“And within the next week to 10 days, we’ll be able to announce something.”

Aston Martin and Vettel are approaching the expiration date of the option in the contract Vettel signed for 2021.

If Vettel did leave, it would put Aston Martin in a very difficult position given the driver market is almost completely settled elsewhere and there are no active drivers available, especially ones of Vettel’s calibre.

Szafnauer said it is “very logical thinking” to determine that if Aston had any doubt about Vettel continuing it would have moved for an alternative earlier in the summer.

“If there was any doubt in our minds, in July when all these other people were thinking about ‘oh should I go to Williams or should I go to Alfa Romeo’ and all that kind of stuff we would have been having those conversations.