Alpine has revealed the first livery of its post-Renault era, and the car two-time Formula 1 world champion Fernando Alonso will drive on his comeback.

The Alpine A521 was revealed in a launch video in its new colours, sporting the traditional blue of the niche French car brand, after an interim black livery was shown last month.

Renault’s relationship with the Alpine brand goes back more than 50 years and it has owned the company since a takeover in 1973. Renault Sport was created from a merger of Alpine and Gordini in 1976.

Proudly representing the colours of the French and British flags, as well as Alpine’s illustrious and historic racing colours of blue, white and red… Here is our 2021 F1 car, the A521!#A521Launch 💙 pic.twitter.com/AwDI1RNtaE

In a racing context, Renault partnered with Signatech to create a successful LMP2 prototype and team that utilises the Alpine name, and has twice won the class in the World Endurance Championship.

Production of Alpine models ceased in the 1990s but the revival of Alpine as a manufacturer has been mooted many times in recent years and the A110 model was relaunched in 2017.

Alpine’s first F1 car, the A521, follows the fundamental architecture of the Renault RS20 of last year because of F1’s cost-saving initiative amid the pandemic.

💙 in the comments if you’re in love! pic.twitter.com/eWgwmKRziN

That means the technical department Renault rejigged in late 2019 and early 2020 is still waiting to fully influence car design, though it has at least led the aerodynamic work over the last 12 months and controlled how the team has approached the changes to the floor in 2021.

What has changed significantly is Alpine’s leadership structure. 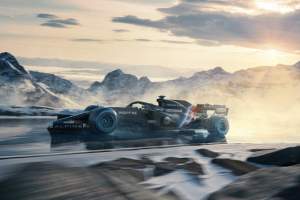 Suzuki MotoGP team boss Davide Brivio has been hired as racing director with Laurent Rossi promoted internally within Alpine to be named CEO.

But Renault executive director Marcin Budkowski keeps the same role for the Alpine transition, which means the team has no specified team principal.

The shake-up has drastically altered the Renault group’s works operation at the same time its new era as Alpine seeks to finally move it out of a midfield scrap – with Alonso back in the fold alongside Esteban Ocon, who will give the new car a shakedown on Wednesday.

However, Alonso’s preparations have been interrupted by a cycling crash last month, which left him with a fractured jaw and in need of surgery.

Alonso was largely absent from the Alpine launch video as a result.

“This year our objective is clear, to continue the momentum that was garnered last year and fight for podiums,” said Alpine’s new CEO Rossi.

“Our long-term vision is to see the Alpine name on the top step of the podium in Formula 1. Motorsports is in our DNA and now is the time for Alpine colours to race and compete in the pinnacle of motor racing in Formula 1.”