Alonso ‘happy rivals are so worried’ about his Renault test

Fernando Alonso says he’s “happy that rival teams are so worried” about him participating in the Formula 1 ‘young driver’ test with Renault.

“Kubica is doing it I think as well, Buemi too but yeah, not much talk about those” :: Fernando Alonso

Racing Point and Ferrari have indicated they will push to get their respective 2021 drivers Sebastian Vettel and Carlos Sainz Jr into the test too, while McLaren is frustrated it cannot do so with Daniel Ricciardo.

Alonso characterised these complaints as Renault’s opposition being unnerved.

“I know there are a lot of talks about me,” he told Sky Sports F1. 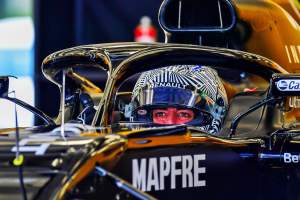 “I’m happy that rival teams are so worried for our test.

“I’m just getting up to speed and they can be more relaxed because I will not develop anything.”

He also pointed out that he is not the only anomaly in the test, with Alfa Romeo and Red Bull running their experienced reserve drivers Robert Kubica and Sebastien Buemi respectively. But neither is due to race in F1 in 2021.

“Kubica is doing it I think as well, Buemi too but yeah, not much talk about those,” Alonso added.

So far Alonso – who last raced in F1 with McLaren in 2018 – has been active in a two-year-old Renault chassis (below) and has taken advantage of the 100km ‘promotional’ running allowance in the 2020 car.

The Abu Dhabi test will be his first fully-fledged run in this year’s Renault, and will be a bonus given 2021 pre-season testing has been cut to just three days in total.

“Obviously with two years out of the sport I very much need every kilometre so hopefully I can enjoy the day with no issues on the car and put in some laps,” said Alonso.

“I just need some kilometres for me.”

Alonso is well aware that what’s got rivals annoyed here is that other teams with new drivers for 2021 have been denied the chance for a similar leg-up, and that the reason no one’s complaining about Buemi and Kubica isn’t a sign of how worried they are about how quick Alonso will be in 2021, but because those two are irrelevant as they won’t be racing.

This is surely Alonso in characteristic playful mood, dropping mischievous mini-bombs with a straight face that belies the fact he may as well have one eyebrow arched and be twirling a moustache like Dick Dastardly.

And it’s great to have it back.

There are hundreds of Alonso quotes from the last two decades – even during the ultra-tension of 2007-spec McLaren – where he sounds like he’s being outrageously blinkered but was surely just stirring.

It’s part of his character, and it’s part of the reason why whether a battle is for a championship or just to get out of Q1, adding Alonso to it adds spice.

This little row has also drawn plenty of extra attention to a test that would’ve gone totally unnoticed without Alonso’s controversial presence.

That shows F1’s missed a bit of a trick here.

The 2020 season finishing so close to Christmas reduces the missed opportunity, but F1 still has three months of no racing to fill coming up.

In a normal season, MotoGP does an excellent job of marketing its Valencia post-race test as the start of the following year’s championship. Riders moving teams hop onto their new bikes in moody test liveries and plain leathers, and while they’re generally banned from talking openly about their new machinery, it creates plenty of anticipation for the new year just as the old one ends.

F1 had a hint of this when a host of 2019 team switchers made an early move for its end of 2018 Yas Marina test, which featured Charles Leclerc’s full Ferrari debut, Kimi Raikkonen’s first run with what was then Sauber (pictured below), Sainz’s first McLaren outing and Lance Stroll trying a Force India for the first time.

The paucity of 2019-2020 driver movement prevented last year’s Abu Dhabi test being a repeat, but the amount of shuffling for next year created a golden opportunity for F1 to start conversations about its 2021 line-up before Christmas and perhaps do a marketing push for its F1 TV service too.

Instead, at least Alonso’s habit of finding himself in controversial situations is drawing a bit of attention to the test.