'A driver called me a fat f*gg*t, it wouldn’t happen today' - The Race
Skip to content
Formula 1

‘A driver called me a fat f*gg*t, it wouldn’t happen today’

When Matt Bishop started covering Formula 1 in the mid-1990s, he was the only openly gay man in the paddock.

The former editor of F1 Racing says he was generally accepted in the media centre and the paddock, with one notable exception.

Speaking to The Race’s Hidden Voices podcast, Bishop said: “By and large people were very polite – there was the odd bit of ribbing, which goes on in media centres all the time.

“The only genuinely nasty thing that was said about me was that I was called a fat faggot by one of the F1 drivers at the time.

“He called it openly to my face, and extensively behind my back.

“I’d rather not say who, as I’m sure 25 years later he has a far more libertarian outlook now than he did back then, as indeed most people do because the world has changed.

“I think in the end, it probably helped. Because even then people regarded that remark as unacceptable, and unimpressive, and if anything they sided with me for being called those nasty names, so I don’t think he dented my reputation, but to some extent it probably did do that for him.”

Bishop, who now oversees the PR for W Series, is a founder ambassador of Racing Pride and while he has seen how attitudes have changed, with a great many more LGBTQ+ people working in the media, marketing and sales, there remains an issue about coming out among mechanics.

“Even in 2020 there are mechanics who are closeted, and they sometimes contact me and say ‘we know you’re out, you’ve been out for a generation.’ 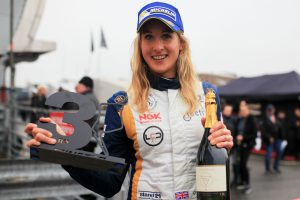 “The world of mechanics is a very white, male, heterosexual one and by and large they share hotel rooms and this leads to a bit of reticence to coming out.

“What I say to them is to do what they want to do, to come out if they feel able to. But believe you me, I would be very surprised if your fellow mechanic held it against you.

“We’re not in 1990 anymore, we’re in 2020, and these people generally live in the UK, not in Saudi Arabia, so by and large I encourage people to come out if they can.”

Bishop has recently completed his first novel, The Boy Made a Difference. All proceeds from the book sales go to the Bernadine Bishop Appeal (a part of CLIC Sargent).

Hidden Voices is a series of podcasts by The Race looking at diversity in motorsport. Hosted by Claire Cottingham, it tells the inspirational stories of those who broke the mould to succeed at the highest level. Click here to subscribe to the full series