The launch of the new 2023 Formula 1 cars is less than a month away. It’s the second year of the new generation of ground-effect cars, and this year’s cars will be slightly different in many micro-areas as various changes have been made to the technical regulations.

There are a number of concerns that the 2023 technical regulations are attempting to address.

One of the most important is combating the phenomenon of porpoising, which tormented some teams last season. Other priorities included the removal of some grey areas within the regulations.

To attempt to definitively cancel out porpoising, the FIA has imposed a change in the height of the floor, which will be 15mm higher on the side edge than the reference plane, as well as a 10mm higher diffuser groove. This will prevent floor stalling but comes at the expense of a reduction in total downforce, especially in fast corners.

The cars of 2023 will therefore likely be slower on average by two to four tenths of a second depending on the circuit. During 2022, a 25mm increase in the floor’s lateral edge was proposed by the Mercedes-powered teams (Mercedes, Aston Martin, McLaren and Williams), but then an intermediate value of 15mm was reached – partly because most of the porpoising problems had been resolved by teams by then. 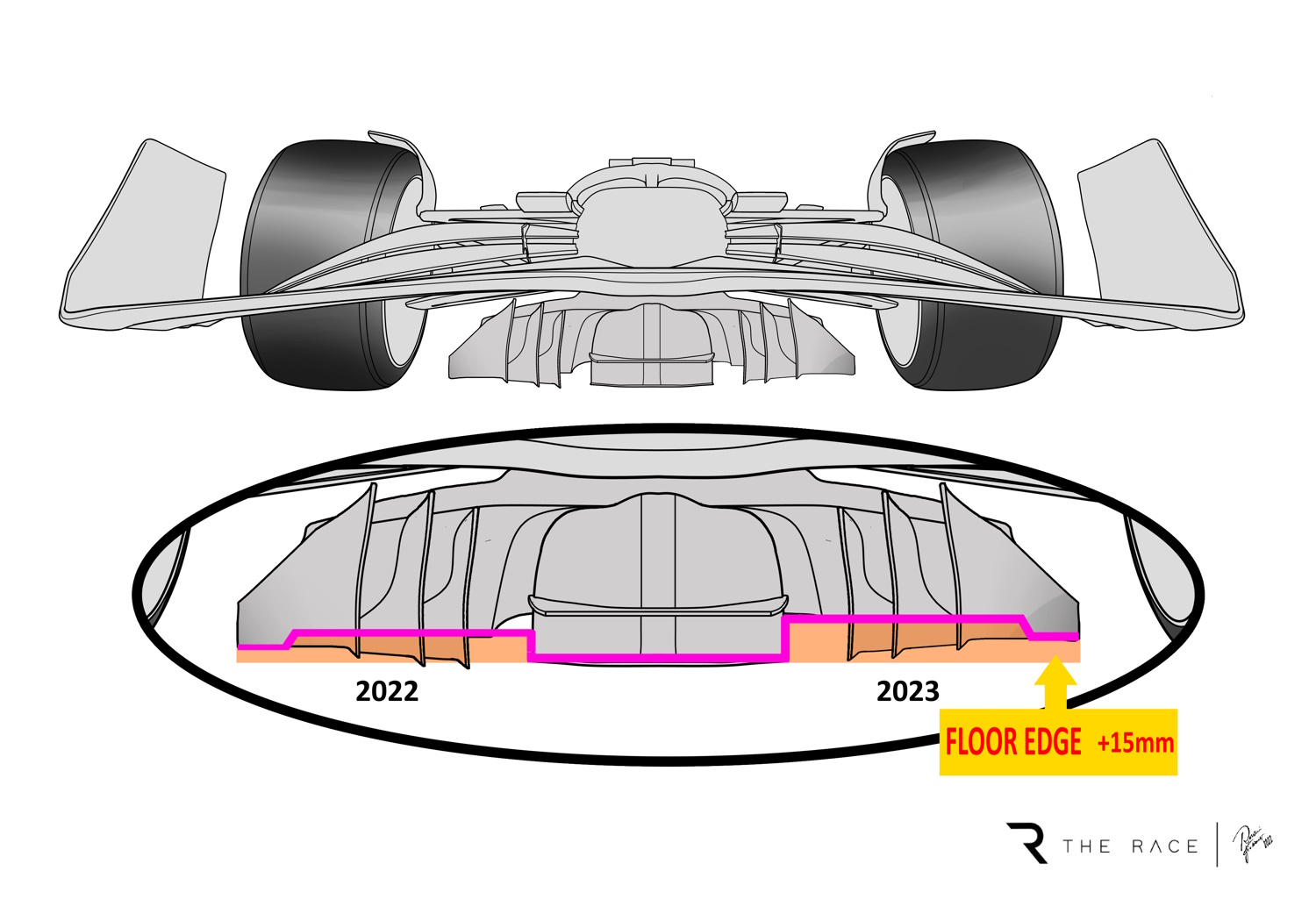 The FIA has taken action against porpoising by completing part of the work that was started by the introduction of technical directive 39/22 for the Belgian Grand Prix after last year’s summer break.

The chassis of the 2023 cars will be equipped with an accelerometer (standard for all and supplied by the FIA) which will monitor the frequency of the oscillations, which must respect the values imposed by the FIA metric.

The floor will also be an important subject in the technical checks as the FIA has strengthened and added further parameters to avoid excessive bending.

The lateral edge will be able to flex by a maximum of 5mm with an applied load of 250N, compared to a maximum of 8mm in 2022. 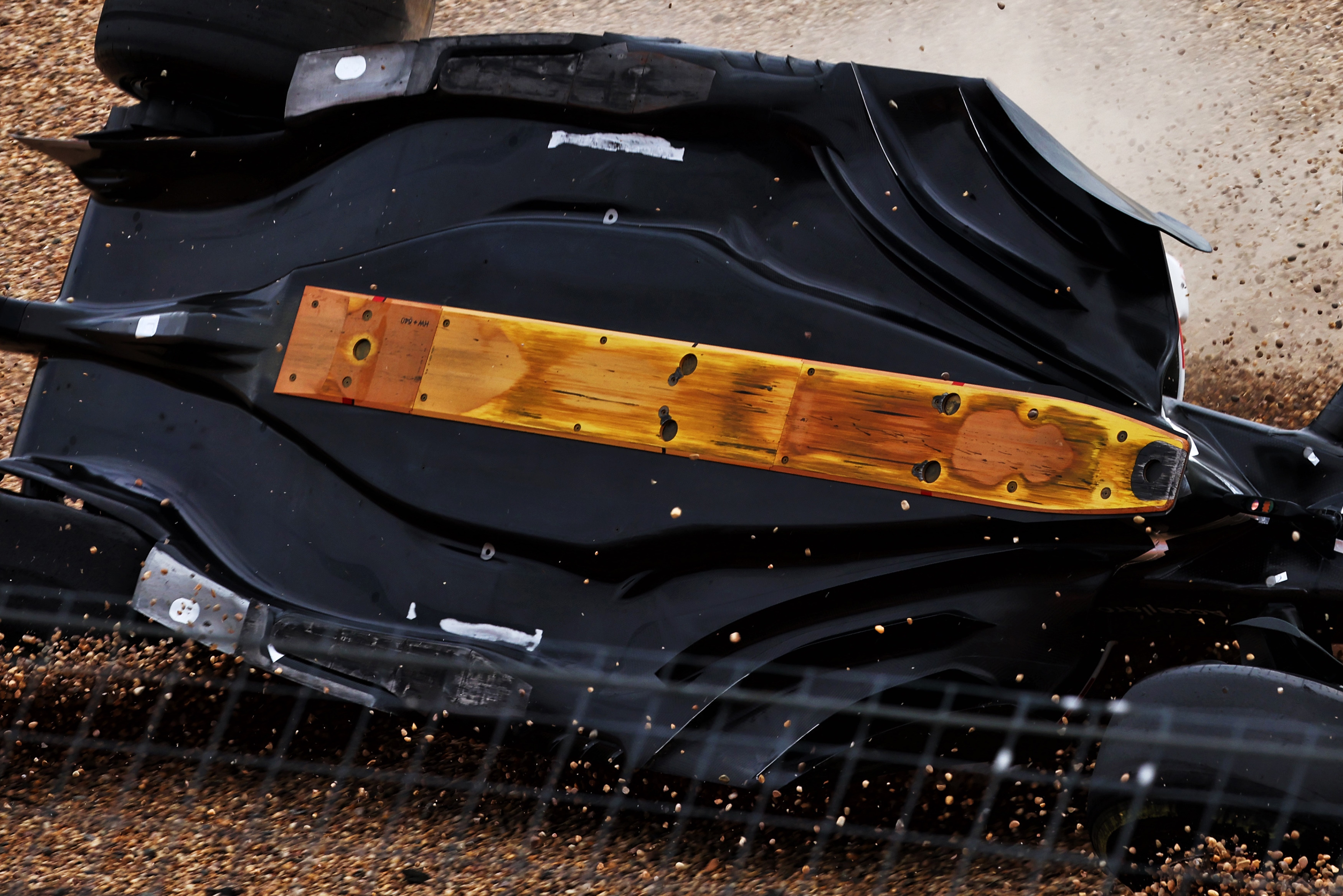 There will also be changes in the flex control of the skid blocks – which Zhou Guanyu’s Silverstone crash last year (pictured above) gave an unusually clear view of – after the controls had been tightened with technical directive 39. There will be four verification points, excluding the front area (where the T-tray once was). The 2023 floors will therefore be stiffer than those of 2022. 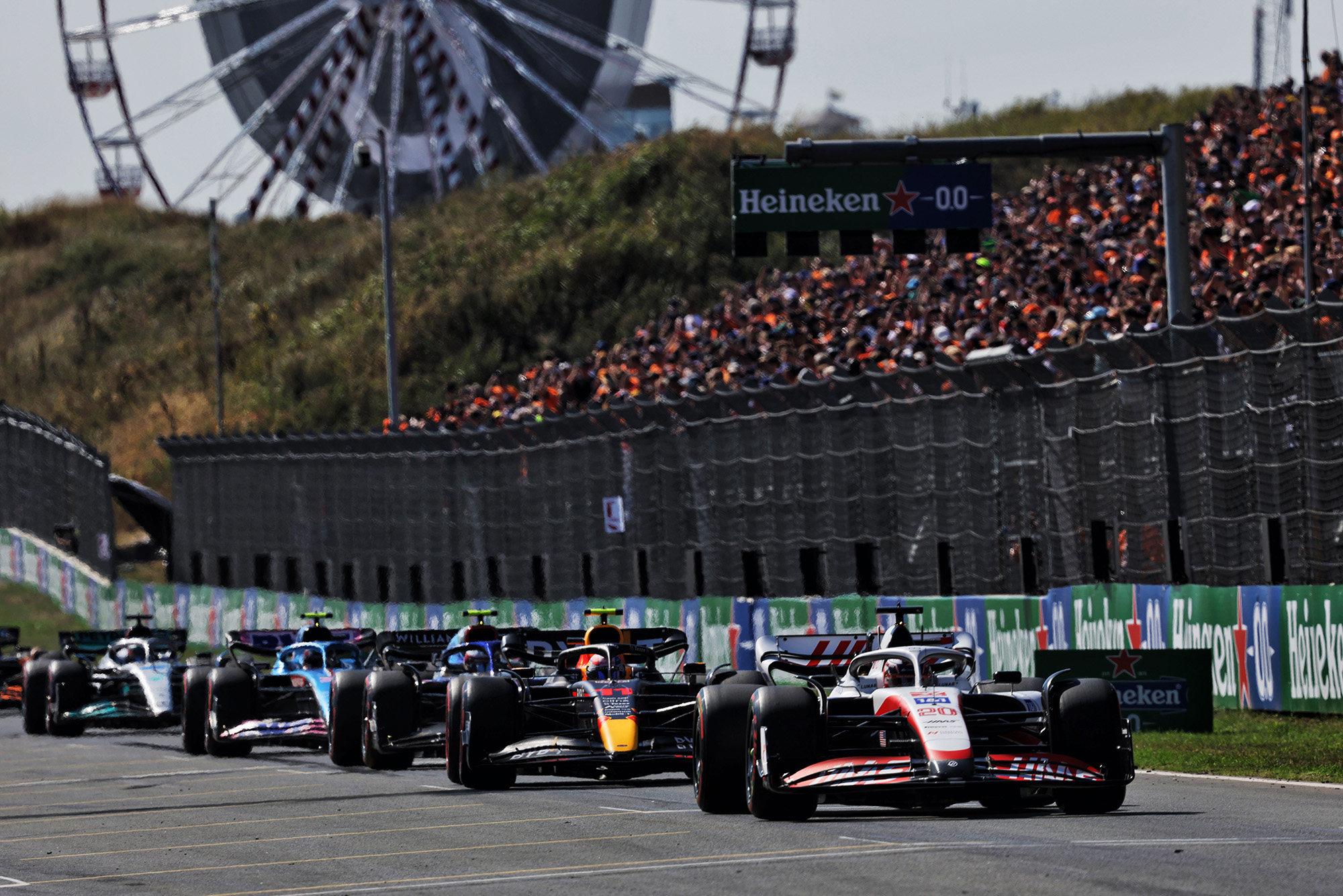 Aerodynamic development will make the biggest difference as power unit development is frozen until 2026 and all cars are now at the minimum weight limit.

The minimum weight value returns to 796kg, that’s 2kg less compared to 2022. Development work over the last year means there will no longer be major problems of excess weight for the teams as there were last season, which led the FIA to raise the minimum value to 798kg.

The management of petrol temperatures will be less restrictive, as the fuel can be cooled by up to 10°C if the ambient temperature is lower than 30°C. A relief valve will be installed inside the tank to avoid internal pressures exceeding 1 bar. 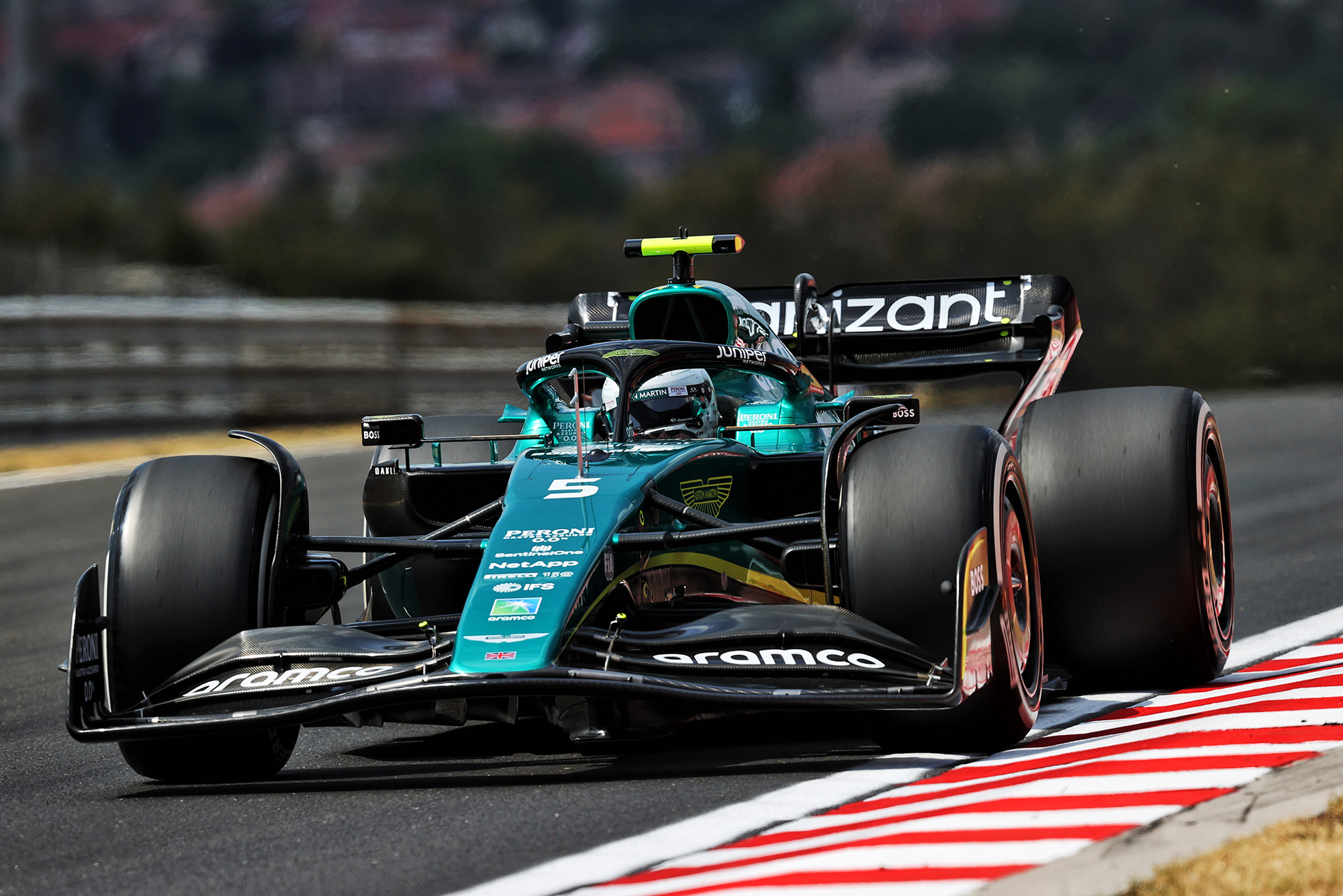 We will no longer see wings like those controversially debuted by Mercedes and Aston Martin in 2022.

The text that makes up the set of rules and technical constraints for F1’s new generation of cars has been structured to make engineers work with three-dimensional models, which are then approved by the FIA technical office.

This should have greatly limited the design imagination of the engineers since it was necessary to respect curves and volumes to shape the cars with ground effect.

However, we saw some teams last year using solutions that flexed the spirit of the regulations when it came to the FIA’s goal of clean and simple aerodynamics that minimise ‘dirty air’.

One solution that the FIA has openly declared illegal for 2023 is the rear wing designed by Aston Martin for tracks where a lot of downforce is needed. 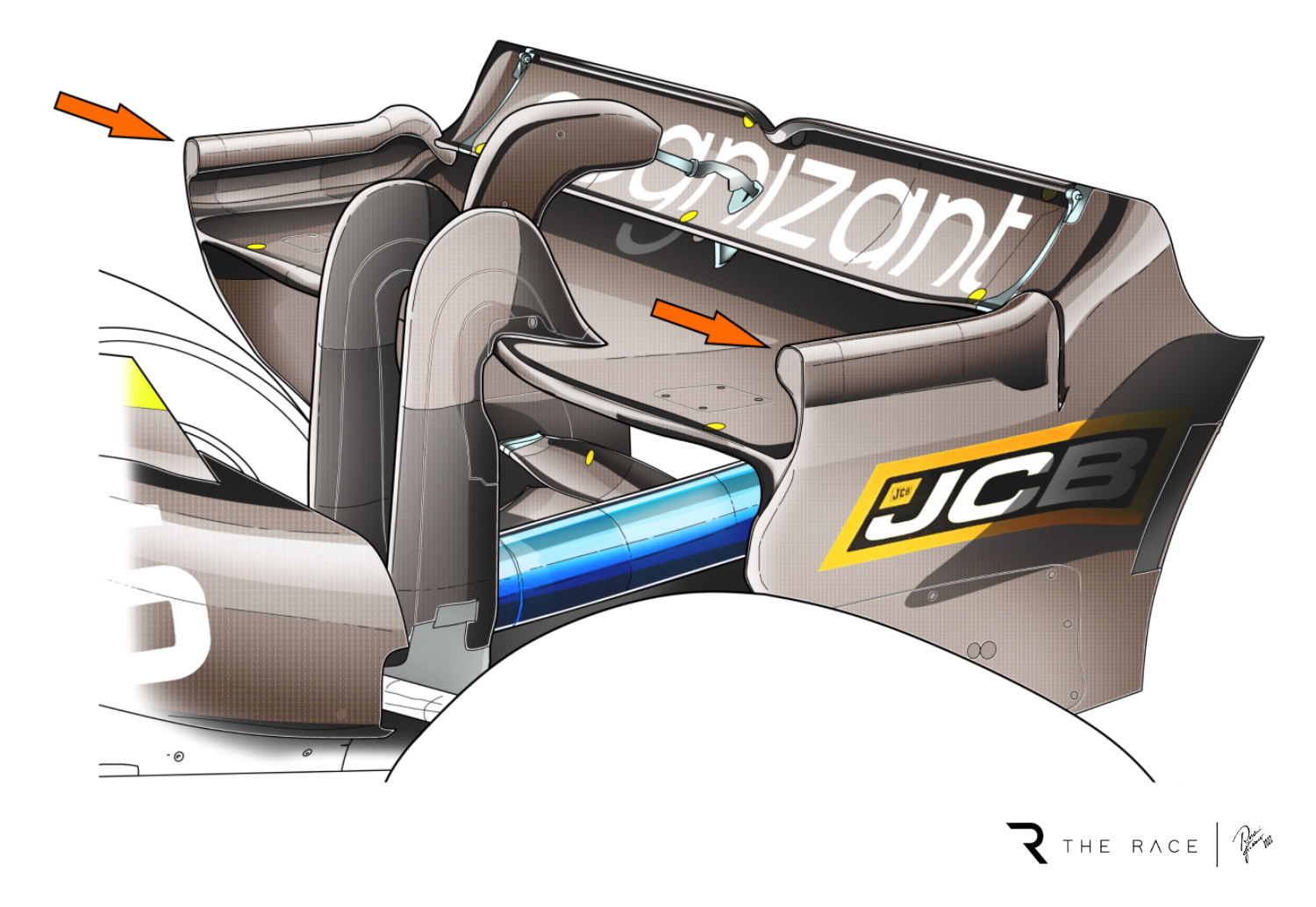 The engineering team led by Andrew Green had studied shapes to recreate the flow bundling effect above the rear wing edge that occurred with cars before 2022. The endplates that protruded beyond the main plane were bizarrely shaped to comply with the concavity and convexity constraints imposed by the regulation. This made it possible to avoid dispersing the flow to the sides of the main flap, maximising the downforce effect.

Less extreme than Aston Martin had been Mercedes’ unique front wing endplate design that featured a solution that opened the side walls to increase the outwash of the airflow. It will no longer be possible to ‘curl’ the area between the side skirt and the flap to create an outlet channel for the flow outwash. Mercedes introduced this solution in Miami last May, and maintained it for the rest of the season, with it also copied in part by Alfa Romeo towards the end of the campaign. 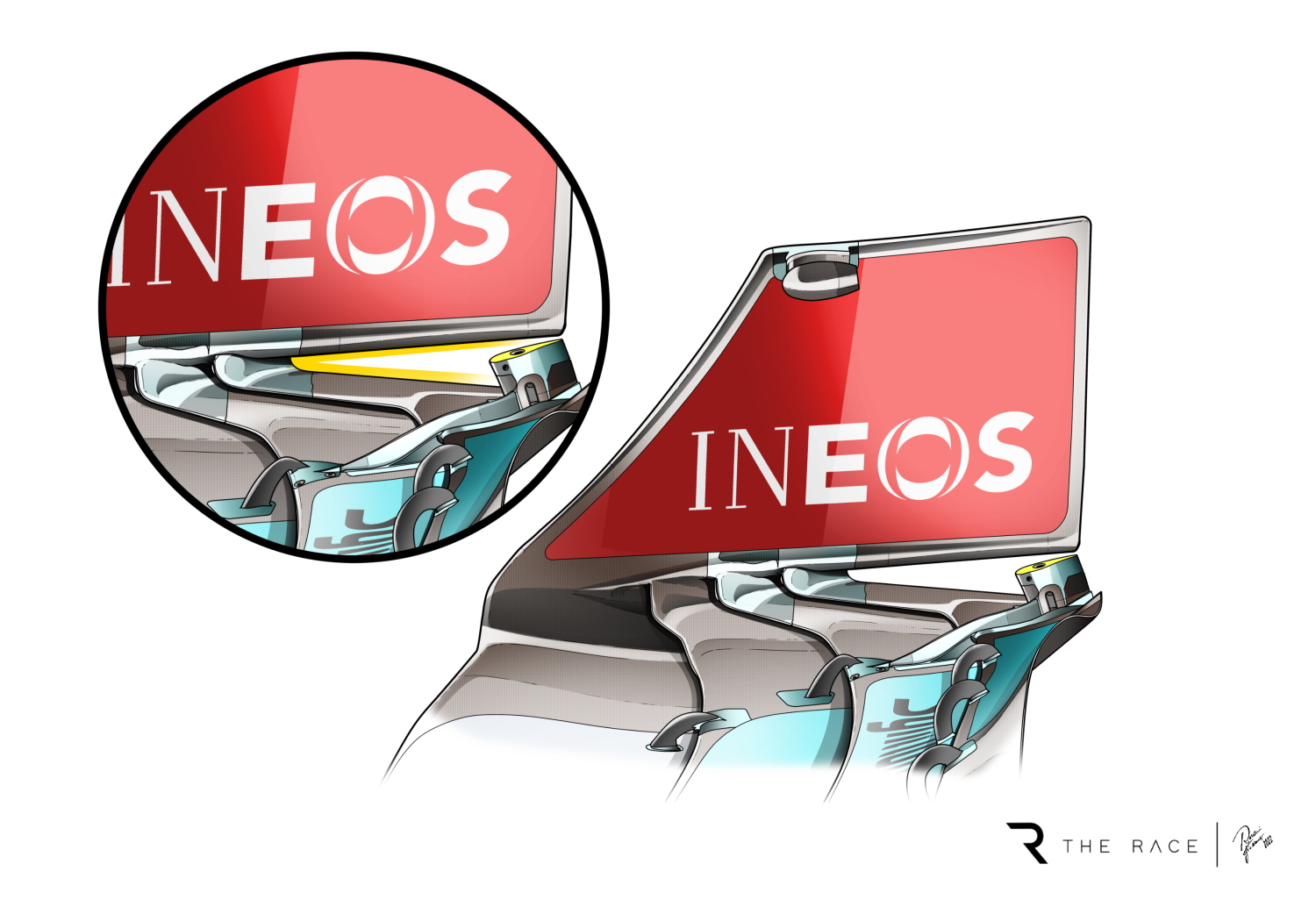 It will therefore be more complicated to produce solutions that exploit grey areas of the regulation since the FIA is studying in every way to avoid teams continuously creating aerodynamics that create penalising vortices for the car following closely. The budget cap baseline figure will drop to $135million and it will therefore be essential to spend resources on solutions that are functional in development, and can be used long term without threat of being outlawed.

The FIA technical office in collaboration with the team engineers continues to work to increase safety and reduce risk in F1. From 2023 we will have more resistant roll hoops. The first lap incident that sent then-rookie Zhou Guanyu upside down at Silverstone resulted in the total detachment of the roll hoop, and this led the FIA to tighten up the crash tests in that area.

A new crash test load will be added, with a force applied in the opposite direction of 49kN for 10 seconds. This will be in addition to the other tests applied in three other directions.

The roll hoop will also be revised geometrically, with the 2023 regulation imposing an angle of 20mm forward and a height from the reference plane that will increase by 50mm. 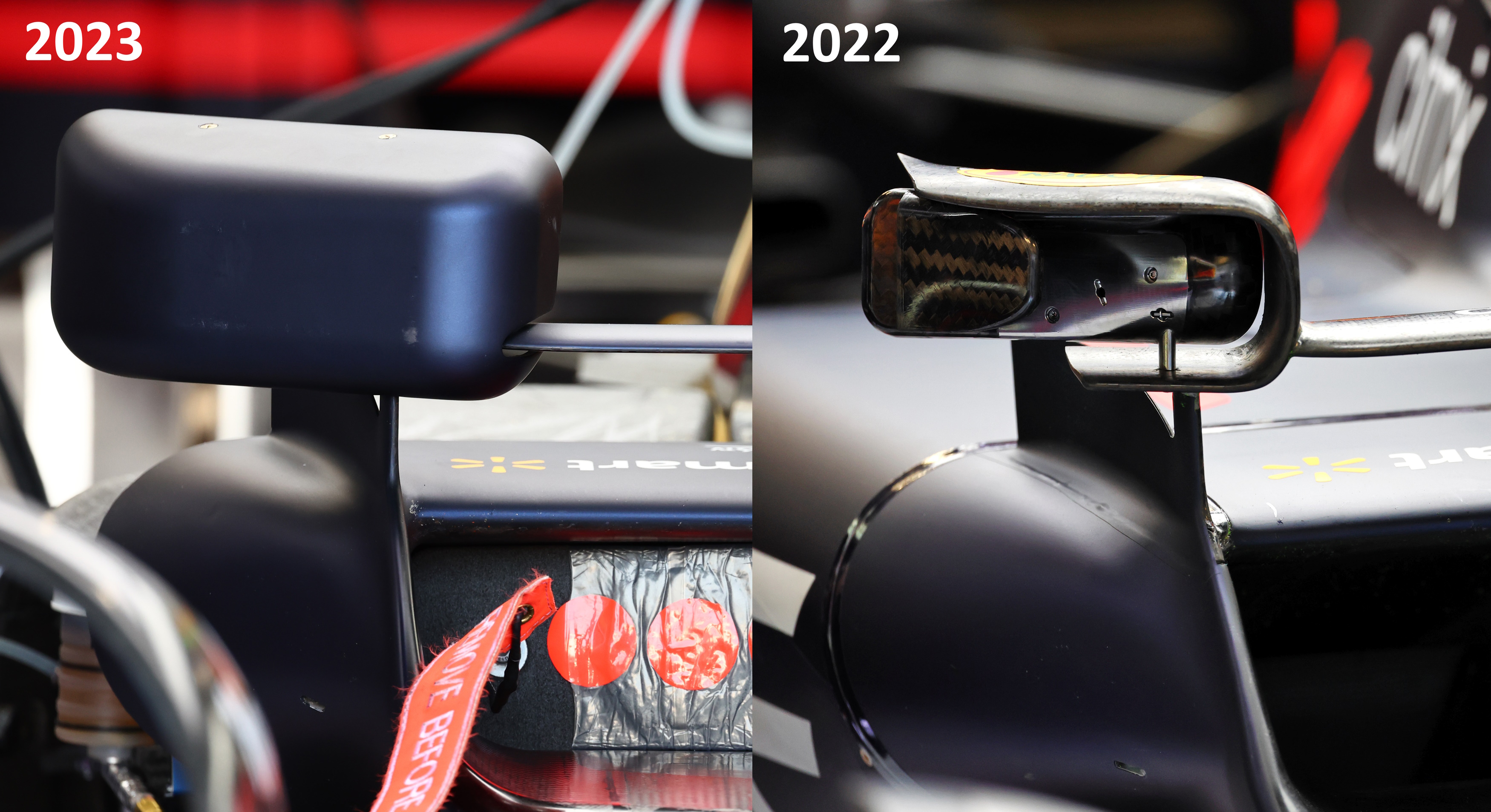 The mirrors, already tested in the 2023 version by some teams last season, will be enlarged and will be visibly taller and wider, forming a 150×50mm rectangle, compared to the previous 60×20mm.