The second round of the iRacing series – dubbed ‘Real Racers Never Quit: A Tribute to Motorsport Legends’ – was again held in Lotus 79 machinery, with the Oulton Park venue chosen in a fan vote. 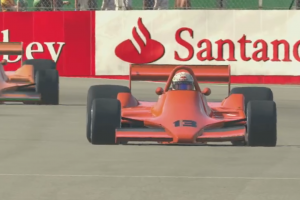 Dani Juncadella led the way in qualifying, with ADAC GT Masters champion van der Linde joining him on the front row and Verstappen – who had won the first Redline championship – only 10th.

But the spectacular UK-based track made for a frenetic race, as the Red Bull F1 man worked his way up the order, profiting from a number of collisions along the way.

First, Juncadella and van der Linde clashed, the latter trying to go around the outside of Island Bend to take the lead and ultimately sending Juncadella into the outside barrier at Shell Oils Corner.

A subsequent incident for F4 champion Franco Colapinto in the fight for the podium up ahead meant Verstappen and F2 racer Felipe Drugovich were soon battling for fifth, and that battle ended when the pair went side-by-side into Knickerbrook, with Drugovich speared off into the wall.

Verstappen then moved up to third when Formula E championship leader Antonio Felix da Costa and F3 racer Bent Viscaal came together up ahead while battling for the final podium position, with da Costa eliminated and Viscaal losing enough momentum to allow Verstappen through and being unable to reclaim position afterwards.

Out front, Bentley works driver Jordan Pepper had put pressure on his South African compatriot van der Linde, but his victory bid ran out of steam when he had a sideways moment out of Lodge Corner in pursuit of the race lead and had to settle for second. 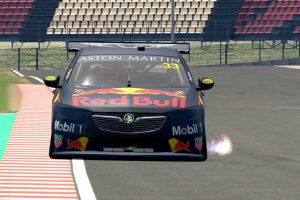 The grid for the second race, which was likewise held over 13 laps, was formed according to the results of the first.

Van der Linde held the lead at the start and would go on to dominate, after breaking clear of the second-place battle between Pepper and Verstappen.

That culminated in Verstappen drawing alongside Pepper onto Hilltop and both sliding on entry into Knickerbrook, with Verstappen securing the spot and going on to finish 2.8 seconds behind van der Linde.

ADAC GT driver Dennis Marschall prevailed over sportscar star Harry Tincknell in a spectacular battle for fourth place, after the pair had followed Viscaal home to complete the top six in the opening race.