V10 R-League: Does a football-style format work for racing? - The Race
Skip to content
Esports

V10 R-League: Does a football-style format work for racing?

While many traditional motorsports have their rules and formats set in stone and get to change them only after a long and bureaucratic process, the world of esports is a lot more free-flowing in comparison.

This is partly down to the comparative ease to set up and run an esports competition versus the time, planning and money needed for any real-world championship.

For those reasons the new V10 R-League features a car that visually has been very heavily inspired by the design concepts of 2022 Formula 1 cars.

Without any environmental or economic factors getting in the way the decision has been made to give these virtual cars V10 engines churning out 900bhp and no traction control, to give the drivers as fast a car and as tough a challenge as possible. 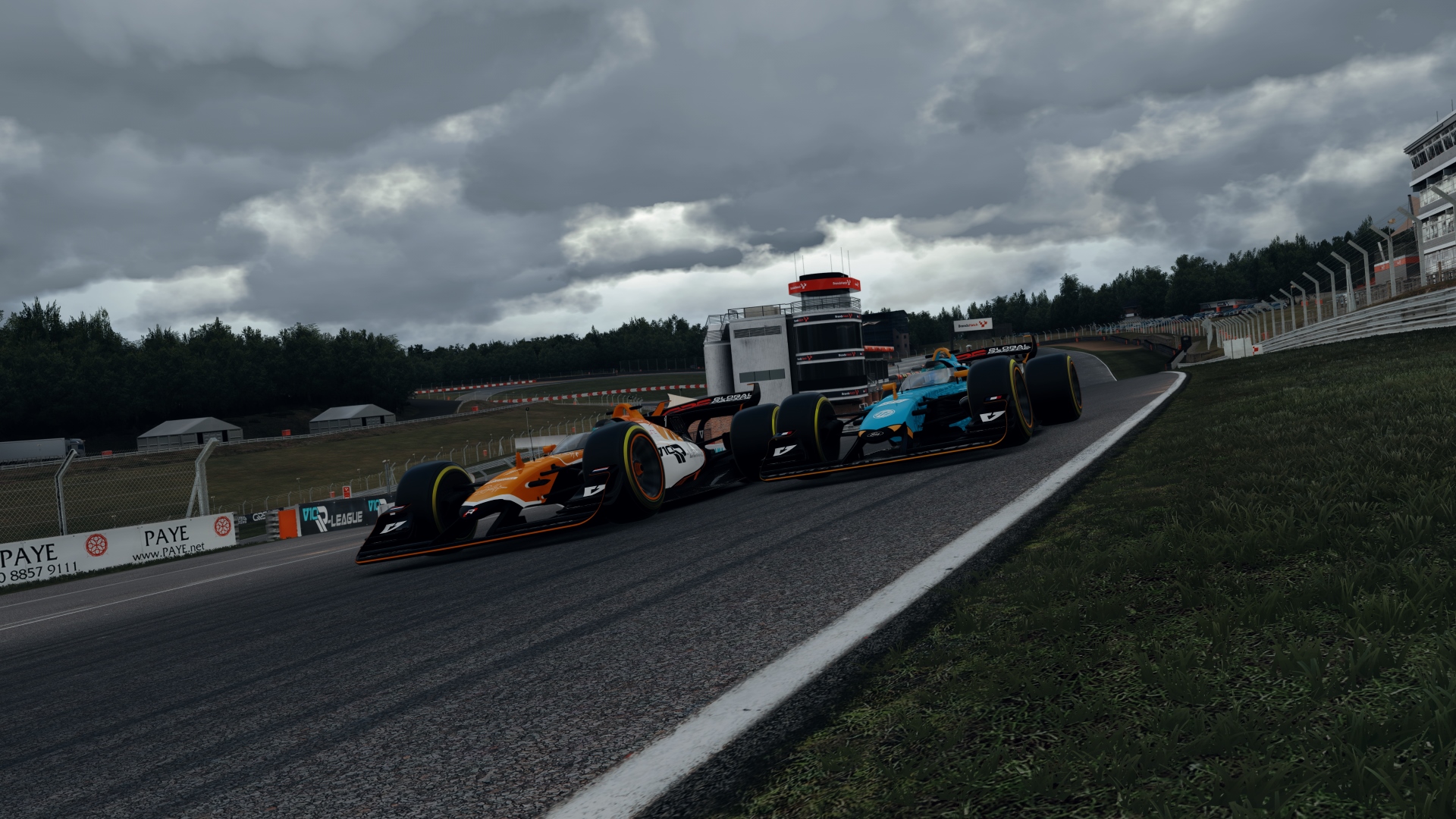 In terms of the format, the V10 R-League is an amalgamation of motorsports and team sports such as football, as teams of drivers compete in matches to score points towards the league table, with teams being able to change which three drivers race for them in each match day.

The eight teams in the league face off against each of the other teams once, with each match day taking place at a different circuit but always consisting of the same three races.

So instead of a starting grid packed with 20+ cars, as only two teams race one another at the same time, the number of cars on the track at any one time is never more than six.

Unlike in traditional motorsport, teams score points based solely on whether or not they beat the other team and not on where their drivers finish on circuit. Each round won is a point gained, with three available to a team on a given match day if it wins all three of its rounds. 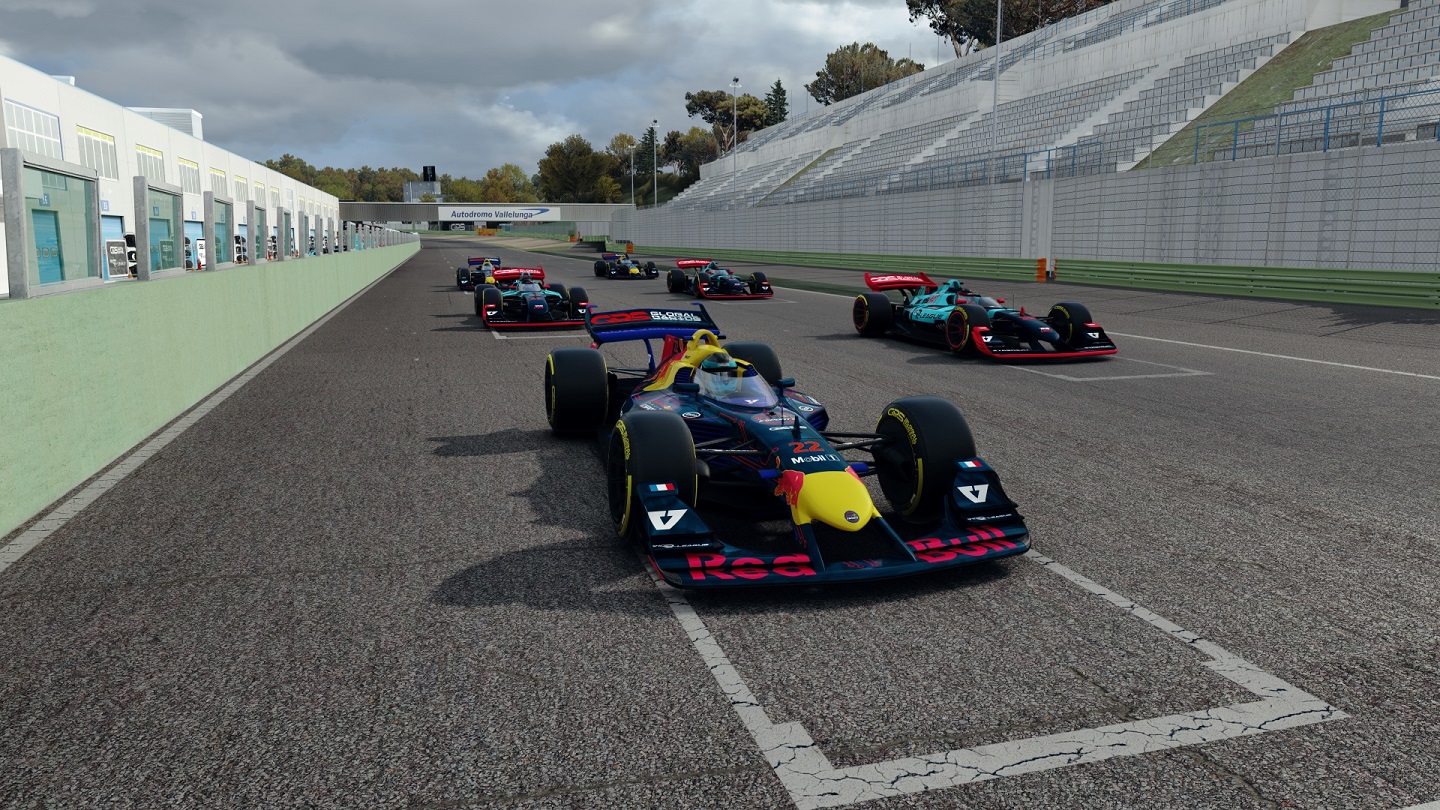 The first round is best-of-three head-to-head races, with each driver from both teams taking part in one of the short races.

Round two is a relay race where each driver has to do a certain number of laps around the circuit before entering the pits and letting their team-mate do their stint.

This format produced one of the biggest shocks of the V10-R season so far, as Jean Alesi Esports Academy Team Suzuki took a point off league table leaders Porsche24 Redline.

JAESA Team Suzuki was trailing Redline in the opening stint, but gained time during the first pitstop and jumped ahead in the second.

With only two laps left to go at Vallelunga Porsche24 Redline was unable to get back ahead, dropping only its second point in the championship to date.

In the final round of each match-up, all three drivers from the two teams race simultaneously score points based on a 10-6-4-3-2-1 points system. 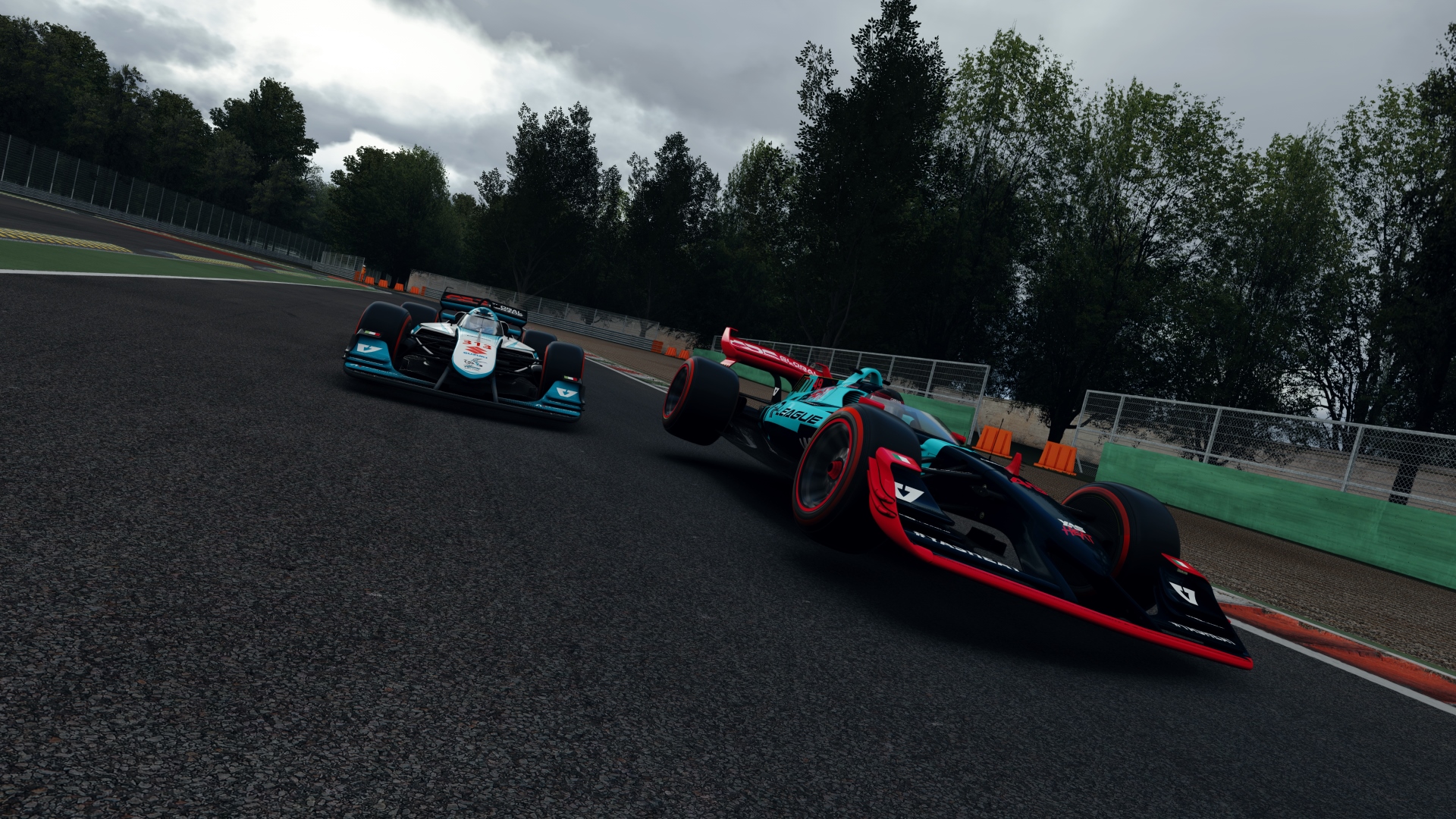 At the end of the race the points each team scored are tallied up and the team that scored the most points wins the match and earns another league table point.

With 26 points up for grabs though, there is the possibility that both teams can score 13 points, which is exactly what happened at the Nordschleife – when Yas Heat and Team Fordzilla went head-to-head.

The draw resulted in neither team scoring a point and therefore only two points being awarded from that match, whereas the other matches had the full three points dished out as there were no ties.

The benefit of holding a number of short, fast-paced races is it theoretically means they never run for long enough for drivers to get into a rhythm and for the winner to be a foregone conclusion.

Most of the time that is indeed the case – but the complete absence of damage has led to instances where drivers spin around or crash heavily and lose so much time that they can’t possibly catch up but remain in the race anyway.

That was certainly the case in the relay race at the Nordschleife between BMW and Racing Point where Lucas Blakeley and Kevin Siggy came together, which resulted in the BMW driver having to reset his car to the pitlane.

As they did the opening stint for their teams, the race continued on for another two laps but with Racing Point 2m40s ahead of BMW, making the rest of the contest a complete formality.

After the Nordschleife round, where there were a number of big crashes, the lack of damage has become a talking point but the series intends to keep damage off for the sake of keeping the racing frantic and exciting – despite it flying in the face of realism. 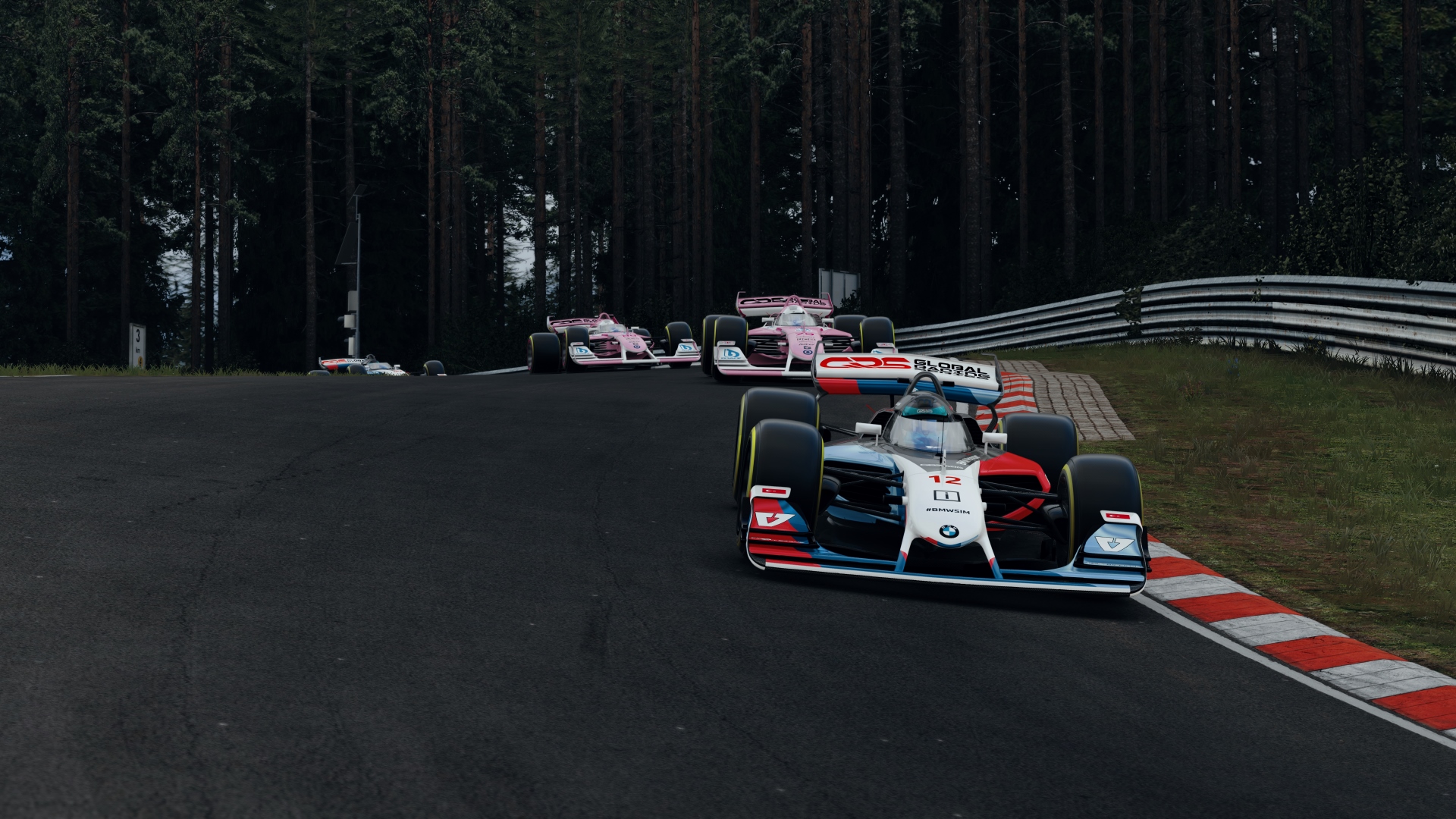 On the surface the format may seem gimmicky but that hides a level of strategy that exists in other team sports, but isn’t often seen in motorsports.

As the V10 R-League heavily focused on inter-team battles and there’s no drivers’ championship, this means the driver line-up in between each match can be changed freely.

Most teams have four drivers in their roster, Red Bull is the only team to have three named drivers whereas Team Fordzilla has five drivers it can call upon.

Teams have swapped out drivers from match to match, ensuring they’re always fielding the three fastest drivers they have at that particular circuit.

It also opens up the possibility that a driver could be told in advance that they’ll be sitting out a match to give them more time to practice for a following match at a different circuit.

The V10 R-League demonstrates perfectly the versatility of esports racing compared to the real-world equivalent, but the wildly different race structure, championship points system and absence of car damage is unlikely to win over many esports-sceptic motorsport fans.

However, as an attempt to produce high-speed esports racing that rarely gets dull, it succeeds. 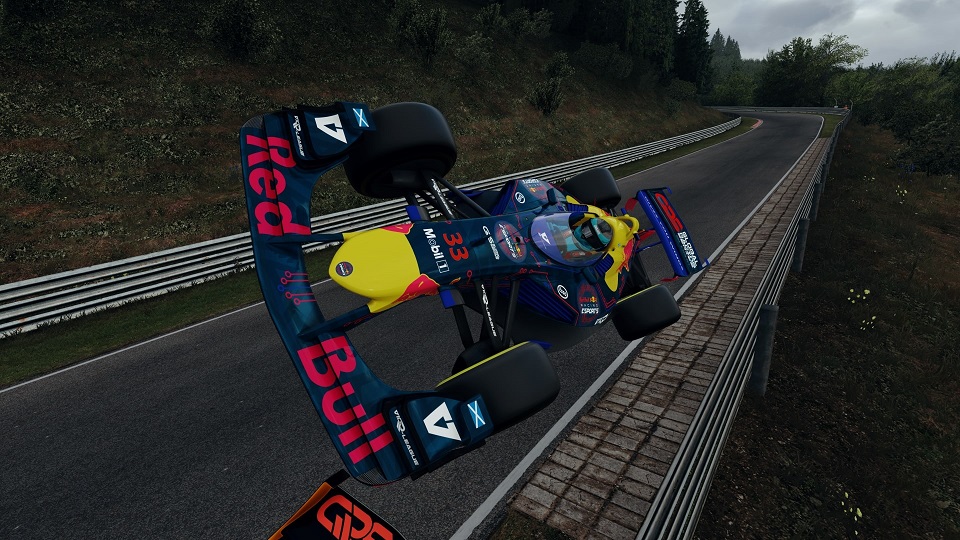