Jun 12 2020
By Valentin Khorounzhiy
No Comments
Share this article

Regular The Race All-Star Series frontrunner Simoncic will share the ByKolles #4 car, run in partnership with the Burst Esport operation, with fellow simracer Jesper Pedersen, as well as Tom Dillmann – who drove for the team in the past two real Le Mans events – and WTCR star Esteban Guerrieri.

Simoncic took the initial lead with a 3m23.683s around the midway point of the 20-minute LMP qualifying session, before shaving off four tenths with his final attempt in the dying seconds.

Simoncic’s final 2m23.380s lap left him with an advantage of just over two tenths over his nearest rival, Arne Schoonvliet of the WRT Team.

The 2 Seas Motorsport entry piloted by Devin Braune rounded out the top three. 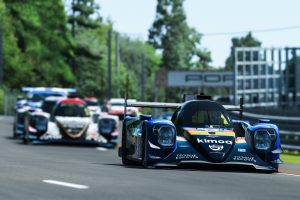 Rebellion Williams Esport driver Jack Keithley was Simoncic’s closest rival midway through the session, and was marginally up on the pole lap after two sectors with his own last-gap effort – only to surrender time in the final sector and settle for fourth.

The Team Redline car that will have among its drivers current F1 racers Max Verstappen and Lando Norris will line up fifth thanks to Atze Kerkhof’s lap.

Though most teams elected to run their designated simracers in qualifying, Stoffel Vandoorne represented his Veloce crew according to the timing, and qualified a standout sixth, six tenths off pole.

The Fernando Alonso/Rubens Barrichello entry is due to line up 13th, thanks to the efforts of Jarl Teien.

Porsche locked out the top three in the 20-minute GTE qualifying that had taken place prior.

46 mins ago IndyCar No Comments