The NOLA Motorsport Park circuit and the Indy Pro cars proved to be a car and track combination that Siggy was unbeatable with, while sometime British Touring Car racer Michael Epps pipped Mercedes Formula E driver Stoffel Vandoorne to top the pro racers.

Siggy started from pole position in both the simracing heat and the grand final.

The first three rows of the starting grid were locked out by simracing drivers, but Formula E racer Stoffel Vandoorne qualified in seventh and overtook Erhan Jajovski, albeit only briefly, for sixth place.

While Siggy established an early advantage, at the start of the second lap two previous All-Star winners, Jernej Simoncic and Bono Huis, swapped positions in the battle for second place behind him.

Inaugural winner Simoncic was defenceless against Huis as the Dutchman used the slipstream to make a move stick into the first corner. 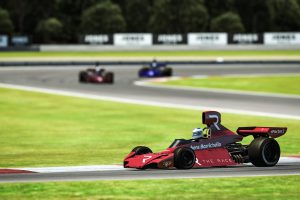 Simoncic making a renewed bid to reclaim second from Huis in the middle of the race allowed Siggy to rapidly increase his lead.

Huis briefly dropped down to third before repeating his earlier pass on Simoncic down the inside into Turn 1.

The winner of the second All-Stars contest, Rudy van Buren, then tried repeatedly to pass Simoncic for third but wasn’t able to get the tow into down the start finish straight as Simoncic was getting the same benefit from Huis’s car.

A mistake from Simoncic, as he lost the rear end around a long left hander, meant he half spun into the path of van Buren, allowing Jajovski to drive around the two cars and opportunistically take third place.

Van Buren, still in fourth as he got around the spinning Simoncic, then set about hunting down Jajovski for a top three spot with just over two laps to go. 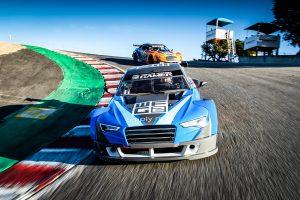 On the final lap of the race van Buren committed to the outside of the S section and was able to keep alongside with Jajovski and had better drive through the turns to take back third place.

Joonas Raivio had made a punchy start and passed van Buren on the first lap.

But his running up at the front came to a sudden end as side on contact with Jajovski sent Raivio off onto the grass and down to 11th place.

Raivio’s antics didn’t stop there as he got involved in a second crash, this time with IndyCar driver Ed Jones.

Raivio punted Jones, who was one of the highest running real world drivers, into the wall at the final turn.

Up front, Siggy took what became an unchallenged win three seconds ahead of last week’s winner Huis and van Buren maintained his record of finishing in the top three of every All-Star final.

Siggy, who was the runner up in the first All-Stars event, believed luck played a key factor in his victory.

“I was kind of surprised by Bono’s pace and I was expecting him to catch me up but I was just lucky – I got a good start and then I just had to manage my pace and I was lucky they were fighting.” Siggy said.

“The car suited me again, just like always, and it was just about getting the qualifying spot on.

“It was just important to get a good start and then just get away from them by like six, seven tenths and then just manage the pace.”