Red Bull Racing Esports drivers Graham Carroll and Sebastian Job shared the spoils in the opening round of the Porsche iRacing Supercup, as Max Verstappen produced a pair of charging drives.

The second season of the TAG Heuer-backed series kicked off two races at Zandvoort, with a reverse-grid opening sprint and a 30-minute feature race.

Reigning champion Joshua Rogers topped qualifying by 0.06s from Jeff Giassi, but with the top eight reversed on the grid it was Red Bull drivers Patrik Holzmann and Carroll who locked out the front row.

And when a brake problem off the line led to a jump start for Holzmann and took him out of contention, Carroll was free to romp to victory.

Coanda driver Tommy Ostgaard pressured Carroll briefly and not successfully, ultimately settling for second, while RaceKraft’s Brian Lockwood made up the podium after fighting off an early attack from Job.

That attack had left Job vulnerable to a charging Rogers, who nicked fourth place and resisted Job’s advances until the chequered flag. 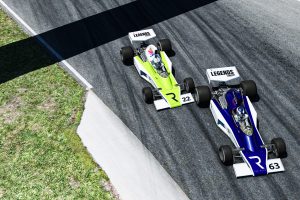 The grid for the main event was formed according to the results of the sprint, and this time the poleman – Carroll – kept the lead off the line, only to go wide into Tarzan and allow Ostgaard through.

A few minutes later, Job – who had started fifth but picked off Lockwood and Rogers – lunged down the inside of his fellow Red Bull driver at that same Tarzan corner and set off in pursuit of Ostgaard.

The leader had established a one-second advantage, but Job made quick work of that, catching up just past the halfway point and lining up a move round the outside of the Hans Ernst chicane.

BOOM! 💥 The moment @G2Sebi made his move for the race lead, with @grahamcarroll33 following close behind 🔥 #PESC pic.twitter.com/OuknWQP7Kw

This left him on the inside for the second part of the chicane – and with Ostgaard refusing to yield, he was nudged wide, ceding positions also to Carroll and Rogers, who would complete the podium.

Amid success for his esports counterparts, Red Bull Formula 1 driver Verstappen – representing Team Redline – was left at the back of the 40-strong grid after a troubled qualifying.

He made it up to 21st place in the sprint, and was 13th soon after the start of the feature race.

Another place was gained at the expense of Thibault Cazaubon, a driver for Romain Grosjean’s new R8G team, while a subsequent move on Martin Kronke at Gerlacht led to Verstappen clipping Kronke into a spin on corner exit and picking up what would ultimately be an 11th-place finish.

Verstappen’s fellow Redline driver Max Benecke, who was runner-up to Rogers in the inaugural season, had a nightmare round.

Benecke was the casualty of a mid-pack crash when an attempt to overtake Kevin Ellis Jr went sour in the opening race, and could only recover to 27th in the main race.

The series will resume next weekend with two races in Barcelona.