Having retired from the opening Legends Trophy race of the fifth round of The Race All-Star Series – Fully Charged by ROKiT Phones, Pirro started from pole and was never headed in the five-lap affair, aided by chaos unfolding behind on the opening lap.

Three-time Indy 500 winner Helio Castroneves swiftly emerged as his nearest rival but was unable to mount a substantial challenge against Pirro, ending up around two seconds adrift as runner-up.

The podium was completed by four-time IndyCar champion Dario Franchitti, who fought off World Touring Car legend Andy Priaulx to hang on to the spot. 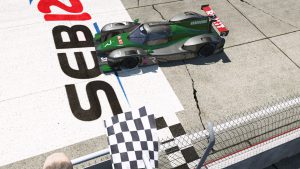 Like the Jenson Button-won opener, the second race was likewise held in McLaren M23s at Sebring. Button had started 16th due to the format, and was among the many drivers caught up in a humongous start shunt, caused by Gil de Ferran struggling to get away quickly from the front row and getting collected by Michel Jourdain Jr.

But Button recovered to fifth in the end, his final overtake coming against former his former Formula 1 team-mate and fellow champion Jacques Villeneuve at the hairpin – after both had passed Max Papis on the start-finish straight and then had contact at Turn 1.

Villeneuve, driving with an Xbox gamepad as opposed to a racing wheel, picked up his second sixth-place finish of the day.

Darren Turner and Juan Pablo Montoya were the only two non-finishers, after a massive crash entering the Ullman Straight sent both drivers’ McLaren M23s into the air.