The problem with struggling to put into words what it’s like to hold an on-point replica Formula 1 steering wheel, much less use it for simracing, is it makes writing a review quite difficult.

As someone who loves driving anything, virtually or in reality, and is a sucker for detail, this is a truly fortunate problem to have. Taking delivery of Thrustmaster’s new, beautiful model of Ferrari’s 2020 F1 car wheel was an unexpected pleasure. Learning it was slightly brain-jumbling. Getting to use it has so far been a fascinating and immensely enjoyable exercise.

In the interest of transparency, Thrustmaster obviously sent us this wheel in advance and also helped me upgrade my set-up so that I could actually make use of it. But that’s it, so while we’re grateful for their generosity in setting this up, you have my word that what follows is independent and authentic!

The product, called the Formula Wheel Add-on Ferrari SF1000 edition, is a faithful recreation done in conjunction with Ferrari. Full carbon-fibre plating, textured rubber grip, 20-odd buttons and switches, all manner of functions and an LCD screen showing up to 69 bits of information – as impressive as it is to admire, the first experience of using the wheel is quite daunting.

It can’t be anything else, because there are so many functions. Take a look at the native mapping available for the F1 2020 game, as shown in the manual: 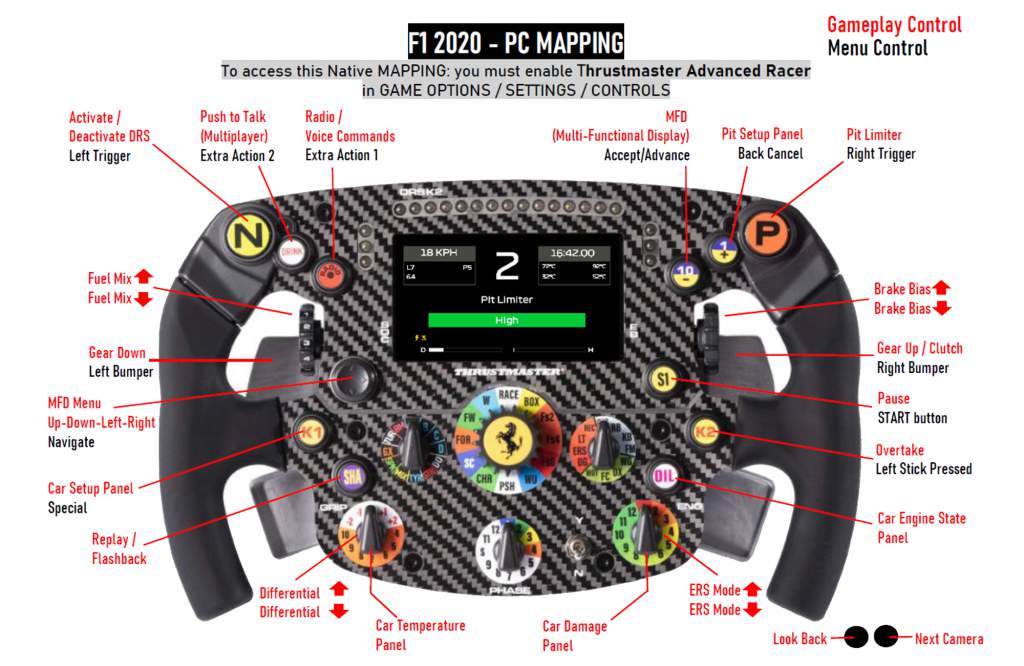 Some of those will be quite obvious, like the “P” controlling the pitlane speed limiter, and “radio” controlling radio commands. Great for easily accessing the questions you can ask Jeff, your engineer, in F1 2020, or you can do what I do and have it set as your talk command button in Discord, which means the radio button on my wheel is connected to my real-life communication system.

Others aren’t obvious but are easy to adjust to. The right thumbwheel controls the brake bias, the left thumb wheel the fuel mix. K2 is the overtake button. “ENG” controls the game’s limited energy recovery system mode, “GRIP” the differential.

The dial left of centre controls the display, which you can cycle through and either show the basic steering wheel display – as shown in-game – or to view things like tyre information and fuel usage. 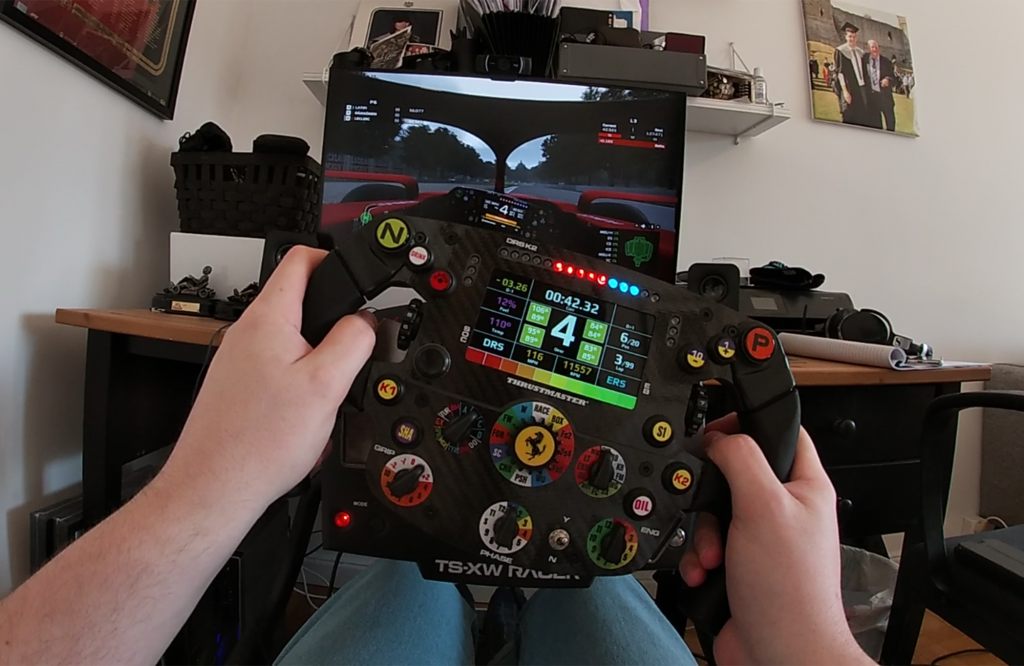 I have to say one or two buttons are counterintuitive at first. I disliked having the big neutral button mapped as the DRS in the F1 game but it’s easy to adjust to and it makes sense given how easy it is to hit with your left thumb. “Drink” is push-to-talk in F1 2020’s multiplayer mode. Sadly, like for Kimi Raikkonen in the 2018 Hungarian Grand Prix, they’ve forgotten to connect your bottle.

This is all related to the F1 game but it is totally customisable. Thrustmaster is awaiting an iRacing patch to make the wheel compatible but I’ve had it working absolutely fine in rFactor 2.

Learning the initial switch and button functions is just the start of it because all the rotary switches can be pushed in as well, and the position of different rotaries also impacts what other parts of the wheel can be used for. For example, the position of “ENG” switch on the bottom right of the wheel at either 1, 2, 3 or 4 determines what the wheel’s lower paddles (beneath the gear paddles) can be assigned to.

The initial process of getting used to the wheel was on F1 2020 because Thrustmaster worked hard with Codemasters to make the wheel fully integrated – “native”, I should probably say – and at the moment it’s the easiest way to enjoy the more stylish elements. Especially the dash, which is compatible with other games in UDP mode – where you need to set up that data connection yourself.

But most of my running since has been on RF2 because I don’t believe this is just a fun Ferrari/F1 novelty, a smart-looking toy, or a collectors’ item with such a limited run of products being sold. And neither does Thrustmaster. It wants it to be viewed as a special product that’s also an extra tool worth upgrading to. 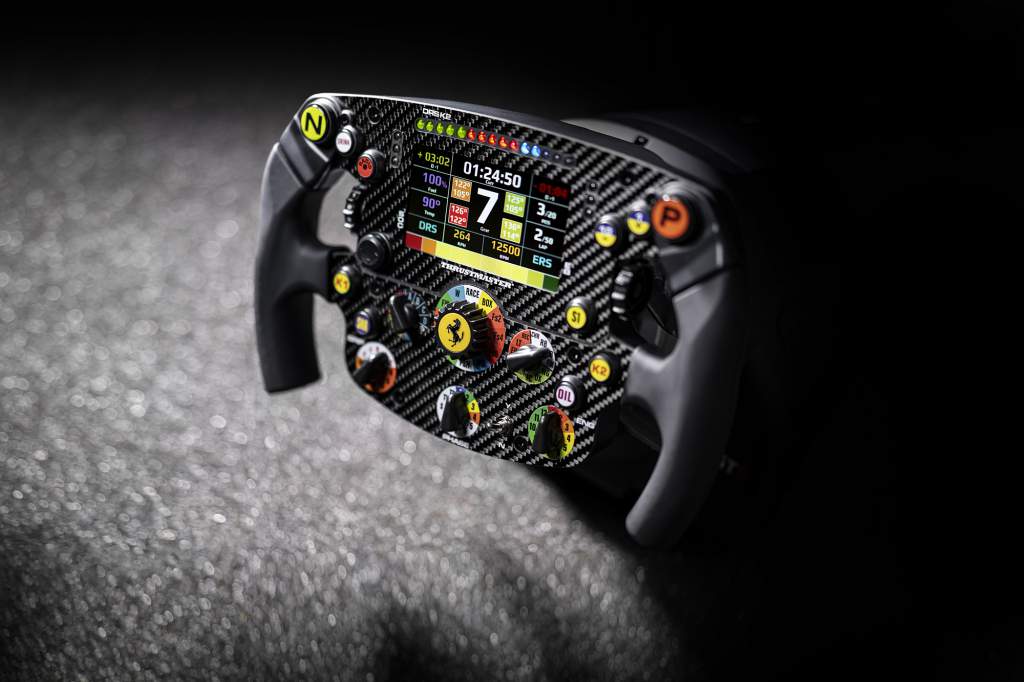 To judge that, I wanted to use it on a more advanced simracing game. I take my simracing pretty seriously but I’ve been using entry-level equipment so far. To sample this add-on I needed a Thrustmaster T Series base, which was kindly provided. And I was very keen to put that to good use in RF2. I think – don’t shoot me! – it’s a superior driving experience to iRacing anyway so the wait for that game’s patch hasn’t affected me at all.

On RF2, I’ve had no compatibility issue with the wheel so far beyond not being able to sync up the dash (if anyone knows whether that will be possible with some UDP tinkering, comment below or hit me up on Twitter!). All I’ve had to do is customise the various button assignments. Fun fact – as I tend to be lazy and skip through manuals, this is how I discovered the ENG switch’s relationship to other mapping options! As I was very keen to assign a paddle to the DRS and clutch respectively.

I’ve had a lot of fun doing stuff like that because while the grip is great, and the wheel feels beautifully balanced because it’s so light and well put together, I believe the true benefit of something like this is its extraordinary functionality. The level of customisation is such a bonus. And despite me being so daunted initially, the positioning of each part of the wheel becomes second nature really rather quickly.

Yet I’ve still barely scratched the surface. The right thumbwheel controls the brake bias, the neutral button actually engages neutral, clicking the ENG switch brings up the car status panel, a couple of buttons have been assigned to looking left and right (I only have one, small monitor) and others control the ignition and starter, plus there’s a force feedback reset button (RF2 loves to randomly lose the FFB…). 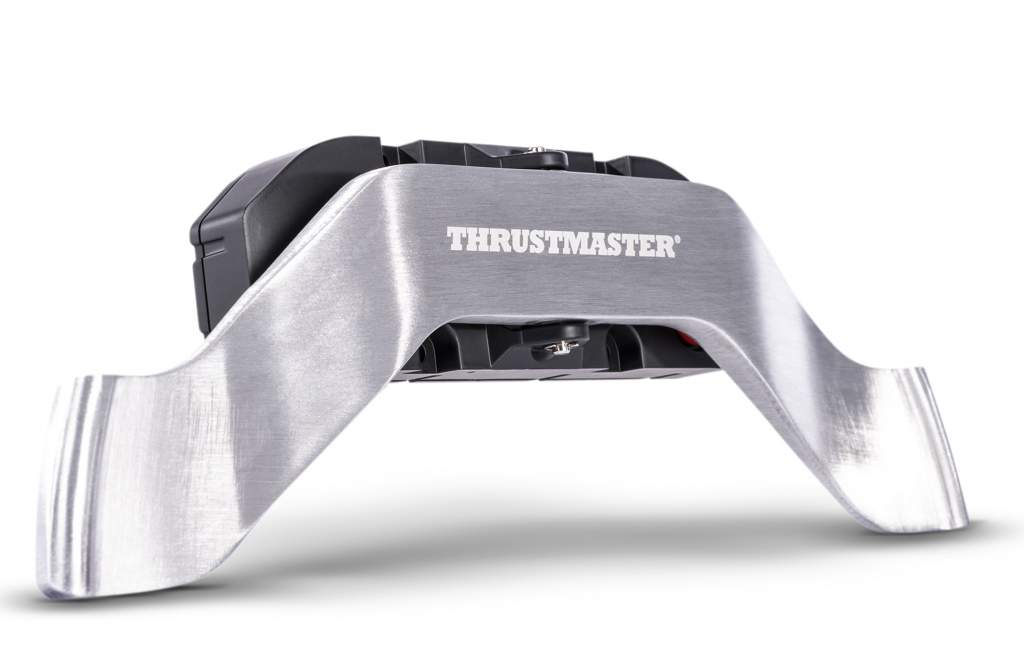 There are real gains, like having fractionally faster gear shifts (less than 5 milliseconds bounce rate on the T-Chrono paddles that can be bought separately for £54.99), DRS activation just by flicking the little finger on my right hand without having to move it off the wheel, and slightly more controlled and consistent launches by easing off the clutch with my left index finger rather than my left foot.

I’ve little doubt there’s much more to discover but right now I’m still revelling in the novelty and the marginal gains it’s offered. For someone who started with such a basic Logitech that had a grand total of about six buttons to assign a dozen necessary functions to, this is a monumental upgrade. It is not cheap, coming in at £329.99 assuming you have a compatible Thrustmaster base to begin with, but given its exclusivity, its quality and its practicality, I expected it to be a good chunk more expensive.

Everything I have enjoyed most about this week is a bit geeky and focused on the small details. But these things add substance to the wheel’s undeniable style.

Why would something like this exist if not to achieve exactly that?