Timmy Hill scored his 674th iRacing win by taking victory in the second round of the NASCAR Pro Invitational series in a dramatic overtime showdown.

A serene Texas race – in stark comparison to the Pro Invitational debut crash-fest at Homestead-Miami last week – had only three cautions until the last 20 laps of the 125-tour encounter, with #24 driver William Byron dominating proceedings.

Byron had led off the caution with six laps remaining in the closing stages, but was bumped up the track one lap later by NASCAR journeyman Hill, before another caution one lap later enforced an overtime situation.

On the restart, MBM Motorsport driver Hill took off and held a gap over the charging five-car pack, taking victory in the second race broadcast on Fox in replacement of the real life NASCAR Cup Series while it is on hiatus for the coronavirus pandemic.

Hill had taken third in last week’s Homestead Miami race, and he and fellow iRacer Garret Smithley had impressed.

At Texas, Smithley took until the last 20 laps to get into contention, but he started the last caution from second.

But as the leader took the inside line, Smithley couldn’t get down the race track and was stuck on the high side, leaving JTG Daugherty racer Ryan Preece to pass him and look to hunt down Hill. 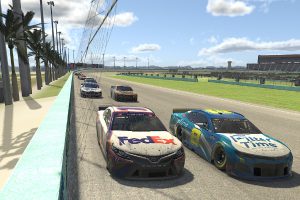 However, it was too late as Hill scorched to the line, and with the last corner being taken flat, it was a processional top six that finished line astern, having broken away.

Behind Hill, Preece and Smithley, Alex Bowman promised to ‘break out the cheap tequila’ as he headed home Hendrick Motorsports team-mate Byron. Bowman had threatened to withdraw from last week’s race having not been pleased with his practice speed, but also impressed in that race after deciding to compete.

Dale Earnhardt Jr – who finished second last week – scored an impressive seventh after spending most of the race on an off-sync strategy which forced him one lap down at one point, and he carried damage after hitting the Turn 4 outside wall mid-race.

Last week’s winner Denny Hamlin finished 25th after a botched strategy call to stay out under a caution sent him plummeting well down the order.

Behind Earnhardt, Kurt Busch completed an under-the-radar run to eighth for Stewart-Haas Racing, ahead of Parker Kilgerman and Kyle Larson.

NASCAR parked Daniel Suarez with 10 laps to go, after he appeared to attempt to wreck Ty Dillon under caution. Spectacularly, Suarez’s dog Emma was apparently to blame, as Suarez missed Dillon and had a huge accident all by himself.

That was fun! Emma apologizes by the way 😅 #eNASCAR #ProInvitationalSeries pic.twitter.com/fcXrmZ61iJ 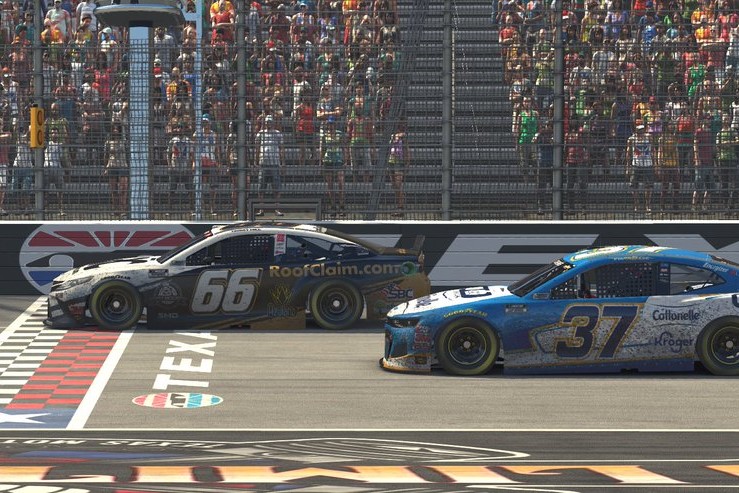