There was a lot of pessimism around the announcement of EA’s acquisition of Codemasters and what this could mean for the British developer’s future games.

A lot of that focused on microtransactions in EA’s games and the quality of most of its efforts when it had the license to make Formula 1 games from the 1999-2002 seasons.

Also the increased funding and resources EA could provide would enable Codemasters to do a lot more in its games, including expanding upon ideas Codemasters has already tried in the past.

While sports such as football and ice hockey are very different to motorsport, that’s not to say Codemasters’ racing games couldn’t benefit from implementing some features that already exist in EA’s current sports games. 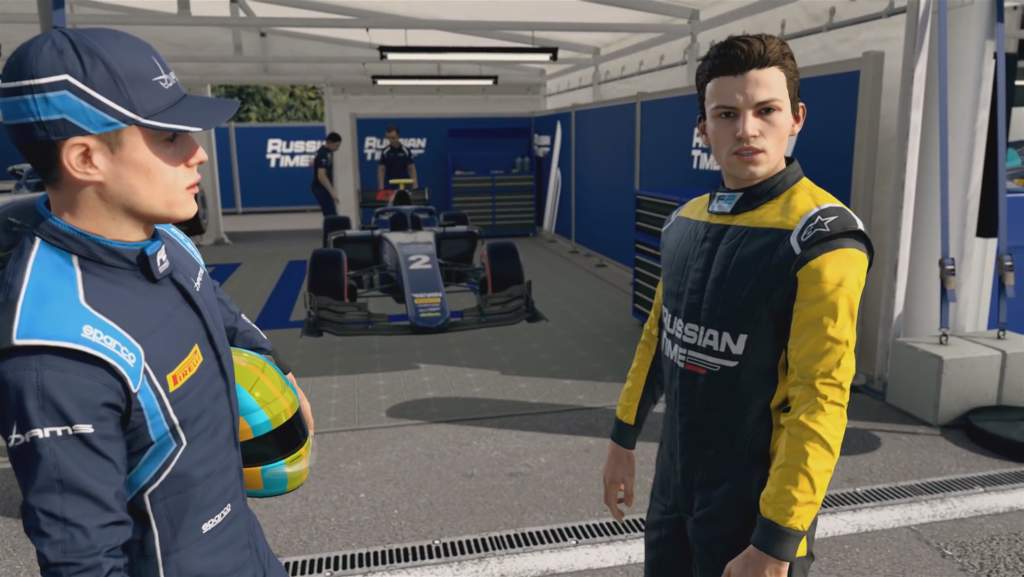 Codemasters first implemented a more narrative-based presentation with its TOCA Race Driver series and then most recently with the start of F1 2019’s career mode.

The later two TOCA Race Driver games and F1 2019 all had first-person perspective cutscenes that tried to immerse players into what it’s like to be a racing driver, with other characters talking directly to you.

In those cases the cutscenes were just a way to break up the gameplay with no major story or choices that could be made, and in F1 2019 the interaction between the two fictional drivers of Lukas Weber and Devon Butler went from cutscenes to just written messages once you progressed from Formula 2 to Formula 1.

By comparison EA created a trilogy of stories centered around the character of Alex Hunter that ran from FIFA 17 to FIFA 19.

Each game contained a fully-formed story with multiple actors hired for each game along with professional footballers also doing motion capture and recording lines of dialogue specifically for The Journey game mode. 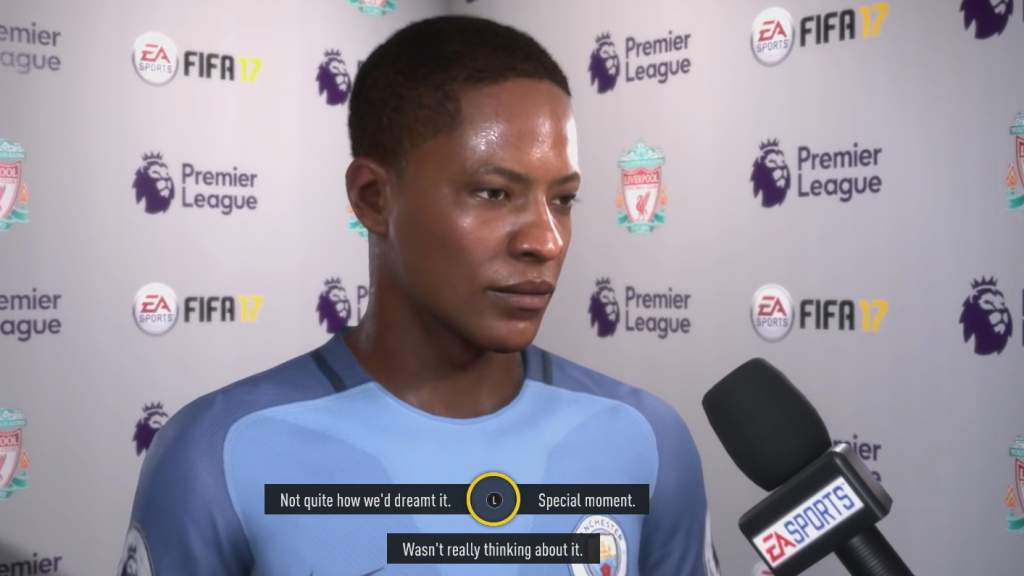 The gameplay wasn’t that different from the standard player career mode, but the story did force you to change clubs when it was required for the purposes of the narrative.

Given EA’s motion capture studios and significant budget compared to Codemasters, it’s possible a narrative-focused game mode could make its way to the F1 games or that the GRID series could have a better produced story than was seen in the TOCA Race Driver games.

EA’s NHL and FIFA games also have a somewhat narrative focused ‘be a pro’ career mode where you can customise your character and spend skill points to improve certain traits.

Codemasters has tried to integrate an immersive story into its games in the past, and EA could give it the tools needed to fully realise that vision. 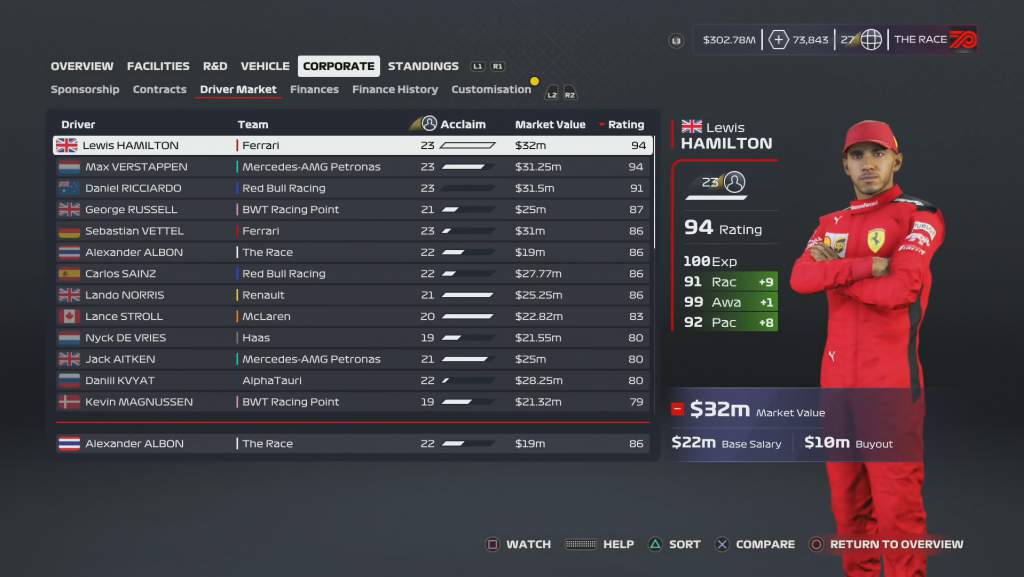 A mainstay feature of the FIFA games has been the ability to create players and add them to whatever team you want, or even edit existing players.

That includes changing a player’s individual ratings, the team they play for and even which position they play in – so you could turn a forward into a goalkeeper if you wanted to.

Driver transfers are a new addition to Codemasters’ F1 games, being introduced in F1 2019 for the career mode.

Then F1 2020’s My Team mode allowed players to create their own team and sign whichever driver they want from Formula 1 or 2019’s Formula 2 grid, to be their team-mate.

This has inevitably led to people experimenting with putting the slower drivers into their own team to see how well they do.

However, players can’t control the driver transfers in career mode or change around the drivers in the grand prix mode, but integrating customisation options like those seen in EA’s games would allow that to happen.

For example you could swap Lewis Hamilton and George Russell’s seats permanently to see how they would fare at each other’s team, or give Mercedes the worst possible driver pairing to see if it can still win races.

Licensing restrictions previously prevented driver transfers, but now they’re a part of the F1 games there should be little stopping them from being manually controllable.

Or as a compromise you could change the ratings of the existing drivers or create a new driver with the best or worst possible stats, all of which are things you can do in FIFA. 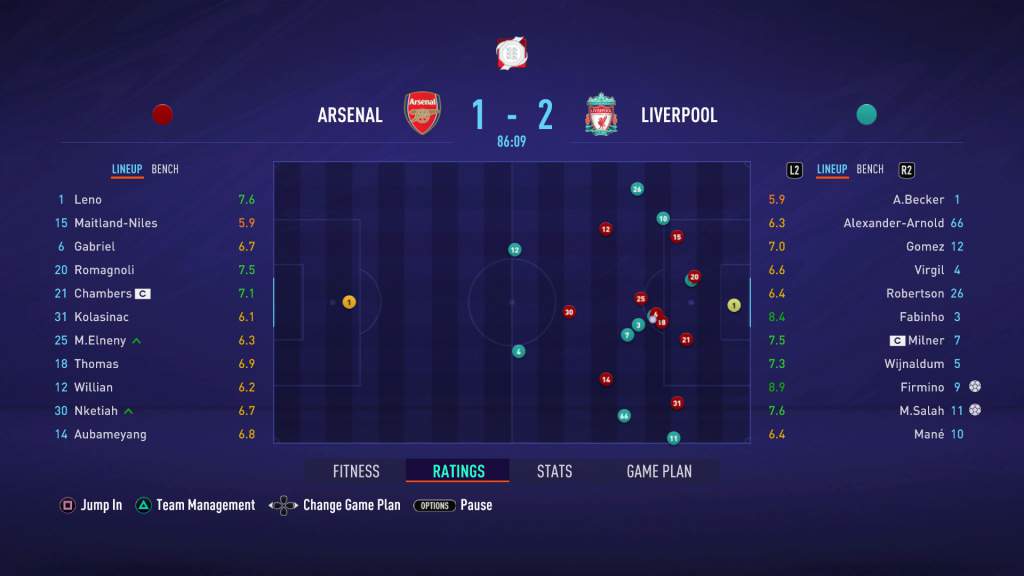 A new feature for FIFA 21 was ‘interactive match sim’, which is where you watch the match play out in a sped up fashion with the players represented by dots on a 2D pitch.

It also has the ability for you to jump in midway through the match if you want to, a useful feature if your team is losing.

In the past few years the F1 games have had the ability for players to simulate both the practice programmes and races, although race simulations simply give players a screen with the race results – which is more comparable to FIFA’s ‘quick sim’.

With the introduction of My Team mode in F1 2020 alongside the existing driver career mode, the two variations of a career mode are comparable to FIFA’s player and manager career modes respectively.

In theory all the pieces needed to make My Team more of a managerial mode are already in place since races can already be simulated, online races have slots reserved for spectators and in offline races the game produces a short highlights reel.

Also Studio Liverpool, which developed Formula 1 games on the PlayStation and PlayStation 2, had a ‘TV mode’ in all of its games from Formula One 2001 up to Formula 1 Championship Edition.

In that mode players could choose the track, weather, race distances and even customise the starting grid before watching the race play out without any player input.

Of course restricting the ability to take part in the races in My Team mode would be very negatively received, but allowing players to choose to approach it as more of a managerial mode, like you can in EA’s sports games, would be a welcome change of pace. 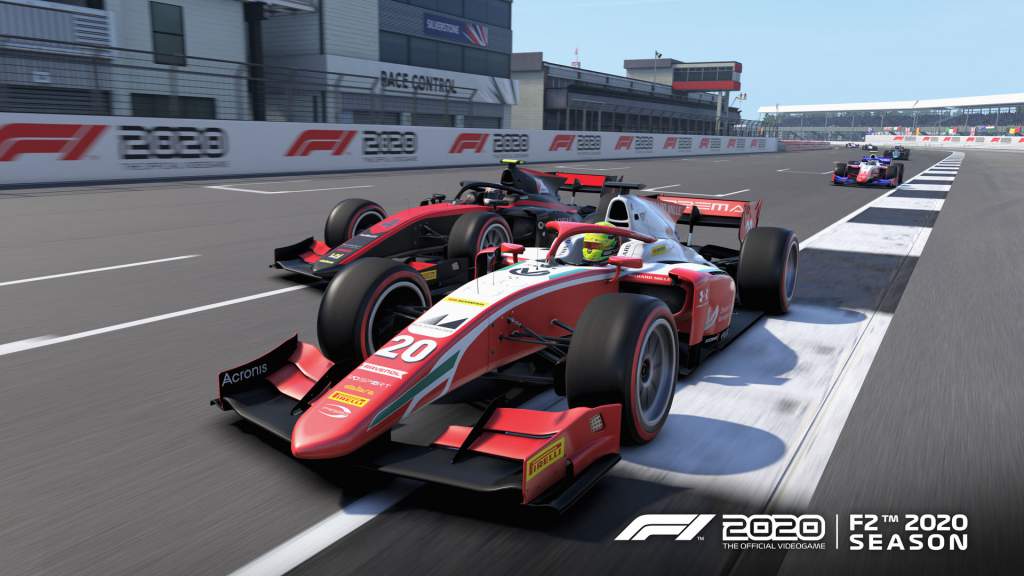 A comparatively minor point but, with the introduction of Formula 2 drivers to the career modes in F1 2020, it’s one that would be a nice addition.

In FIFA’s manager mode you can view which players had the most goals or assists or clean sheets in a season, as well as the league tables of divisions in other countries and how competitions such as the Champions League played out.

That information, particularly the individual player stats which you can also view club by club, is helpful for deciding which players you would want to sign for your own team. 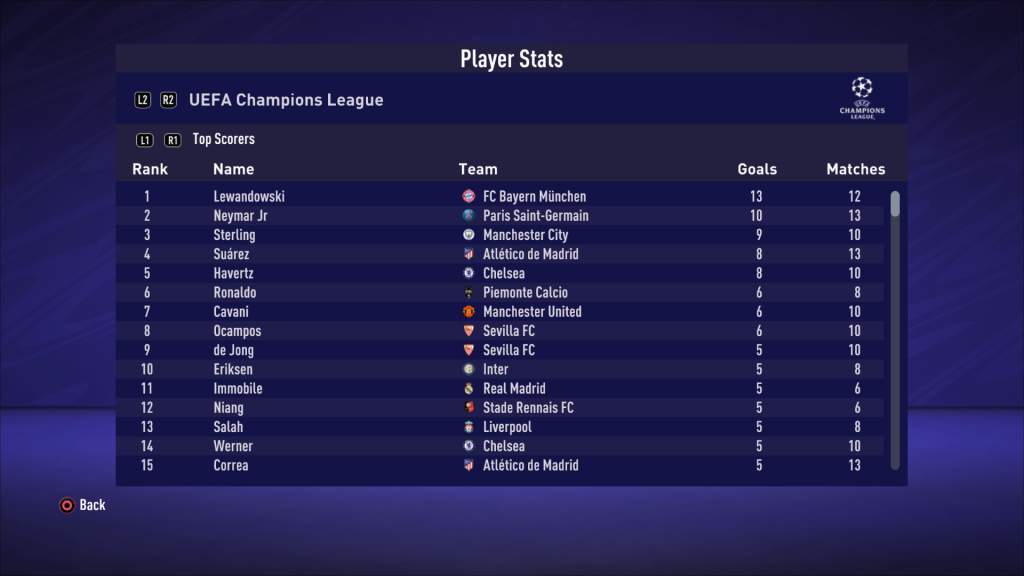 In F1 2020 the Formula 2 drivers can be signed by all the teams but all you can judge them on is their ratings, so logically you would simply choose the driver who has the highest overall stat.

As an alternative the F2 drivers who aren’t part of the current F1 grid in the game could take part in a concurrent F2 championship, with players able to view race results or championship standings.

Viewing who’s doing well in the feeder series would allow you to make a more informed decision about who to sign for your F1 team.

Also if the drivers’ ratings changed based on how well they did in F2 that season, it would make the driver market more dynamic and unpredictable as they wouldn’t all improve at the same rate from one game save to the next.

It’s not a totally new concept to racing games, even if the idea is lifted from EA’s sports games, as Motorsport Manager had different racing series running simultaneously and you could view who did well in each championship even if you didn’t take part in it.

With F2 only recently introduced into the F1 games it would make sense to permanently integrate it into a career mode and have it continually affect the 10 seasons of F1, rather than it simply being an optional part at the start of a driver career mode. 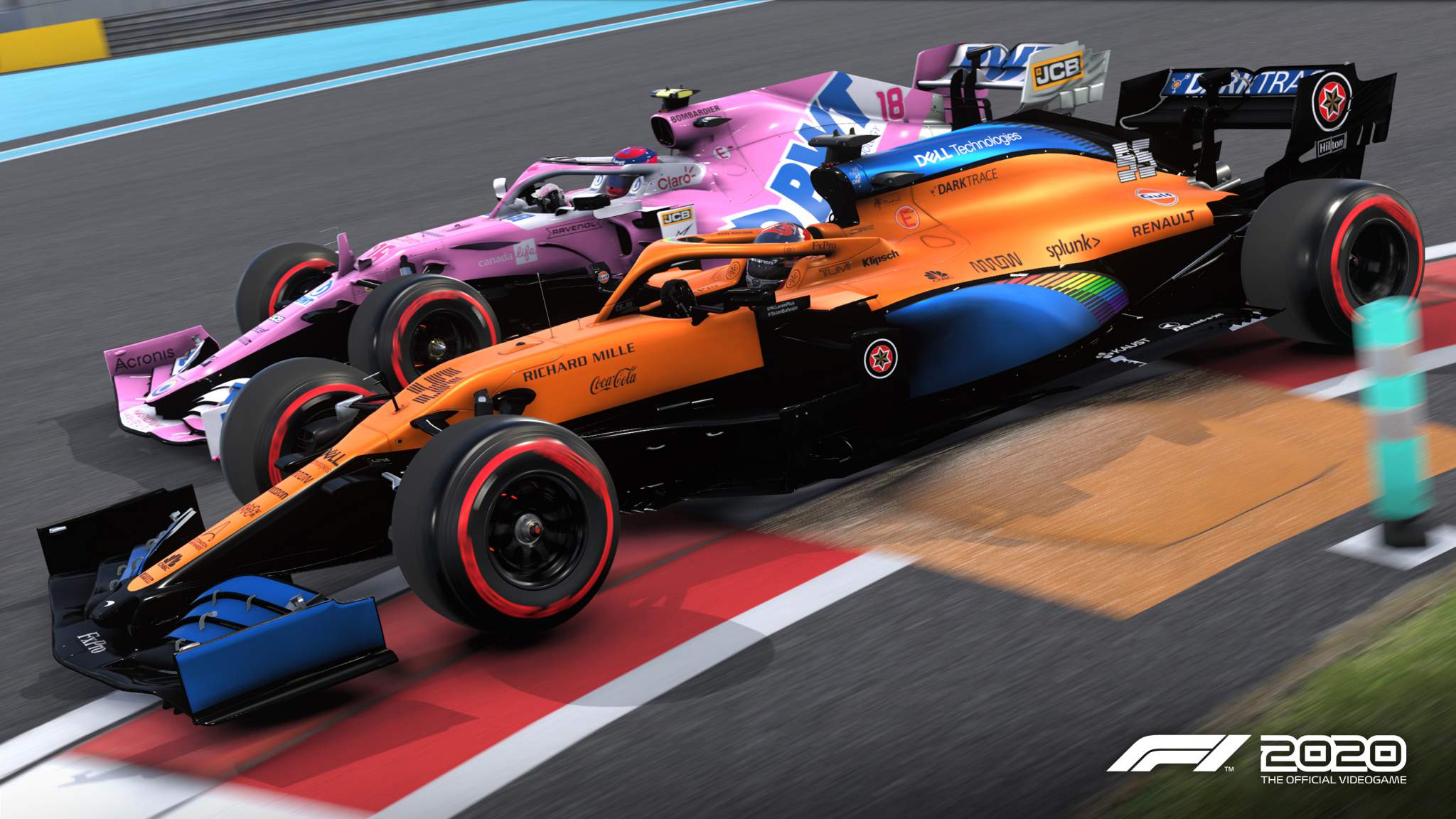