Correa on the Hubert crash and his battle to recover

Two broken legs, a fractured spine, two weeks in a coma. It’s hard to overstate what Juan Manuel Correa has been through in the past six months.

He lost a friend, and he nearly lost his own life. Yet not only does the 20-year-old have a positive outlook on life that many would envy, but he is also certain that he will be back in a racing car.

On August 31 2019 at Spa-Francorchamps, Correa and 22-year-old Frenchman Anthoine Hubert were involved in an accident on the second lap of the Formula 2 feature race.

A series of unavoidable incidents put their two cars on a collision course, with Correa’s Charouz car hitting Hubert’s Arden machine at a near-exact right angle at the top of Raidillon. The impact left both vehicles mangled, with Correa’s feet exposed and Hubert’s car torn to shreds. Hubert suffered unsurvivable injuries and died at the track’s medical centre. Correa broke his back in two places, fractured his left leg and shattered his right.

Despite the severity of his injuries, Correa remembers everything about that day.

“I never lost consciousness, which is a bit weird because it was a big impact—big Gs on the whole body. It all happened very fast,” he tells The Race.

“Something went under my car, I lost control because the front tyres were up in the air, and from then on, I was a passenger. I didn’t realise I was going to hit the other car until the last moment when I saw a pink thing in front of me. It was a big surprise, a big shock, and very painful.

“The pain in the legs was pretty much immediate. It was strange because of the levels of adrenaline when we race, usually when you have a crash; you don’t feel any pain for a few hours at least until the adrenaline goes down. But this was not the case because obviously the legs were shattered. 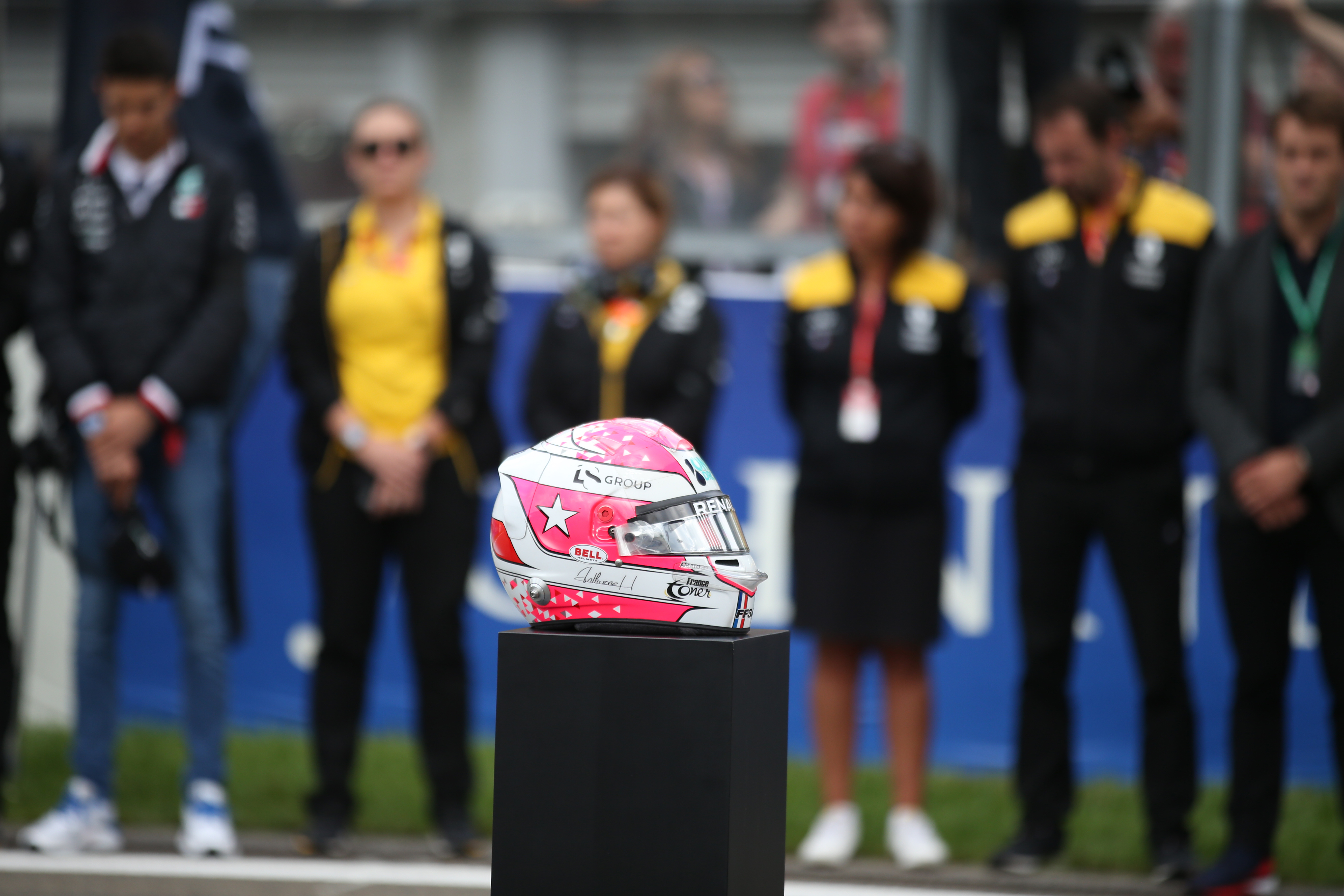 Correa knew immediately that his injuries were bad. Initially, he thought his legs had been severed and were only staying in place because of his race suit. He was airlifted to the hospital in Liege where he underwent an initial surgery and then transferred to London where he was put into a coma after developing acute respiratory distress, delaying the progress that could be made on saving his shattered legs.

“The doctor says there’s a big chance I’ll never have ankle mobility again, but at the same time, I’m optimistic it will work” :: Juan Manuel Correa

“I really regained my consciousness about three weeks after the crash. My self-consciousness knew what had happened, but I asked a lot of questions to have an idea of what went down. They told me again about Anthoine passing away. The whole thing was pretty traumatic.”

Once he was awake, and his lungs stabilised, the fight to save his right leg began. Multiple surgeries, including one 17-hour marathon operation on 29th September—almost one month after the crash—successfully saved his right leg.

Although both legs were saved, the healing process is far from over. To this day, Correa has a metal cage around his right lower leg as he waits for the bone in his shin to heal – only after that will they know if he will be able to use his ankle in the future. 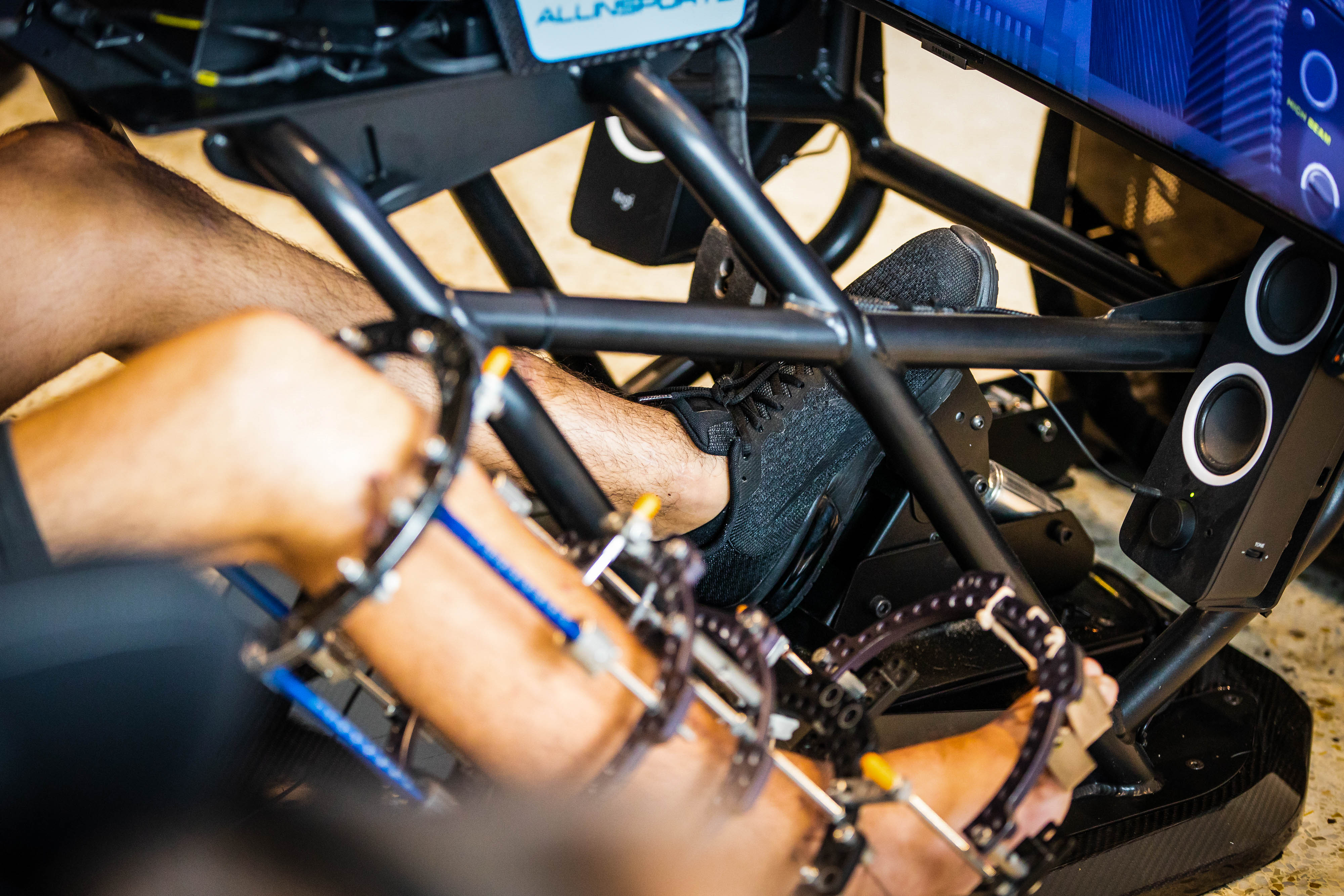 “The injuries I had, the worst one was to my right leg, so I lost six to seven centimetres of tibia,” he explains. “The left leg was just a fracture, so I have a metal rod in the leg to stabilise it. It is a bit painful, but that leg is going to be fine.

“I broke two vertebrae as well. The vertebrae, thankfully, healed by themselves just from the time that I was immobilised in the hospital. So the main work we’re doing right now is to the right leg. We regrew the seven centimetres of bone, that’s done.

“Now I’m just waiting for that new part of the bone to get hard again so I can put weight on it. After that, it will be to see how the ankle is doing, because it was totally shattered.

“That’s probably my biggest concern. I know the bone has regrown, it has healed up, it will be fine, but the ankle, once it gets damaged, it’s almost impossible to fix it. The doctor says there’s a big chance I’ll never have ankle mobility again, but at the same time, I’m optimistic it will work.

“I’m ready for any challenge that I will face. I’m sure there will be some setbacks, that’s normal for an injury of this size, and I’m just ready to overcome them.”

Correa has already worked hard in the past six months to overcome the obstacles before him, and now he is working even harder to ensure he’ll be fighting fit when it’s time to get back in the car. He was back in the gym by 7th November last year, as soon as he got the clearance to train his upper body. He undertakes rehab work every day to give himself the best possible chance.

“At the moment, it sounds weird, but I’m enjoying my life” :: Juan Manuel Correa

“My previous routine before the accident of training five, six hours a day has helped me mentally to go every day to the gym. It’s not new for me. For many people, rehab is hard because you have to get into this training mentality and go to the gym constantly.

“Tears are coming out of your eyes when they do the tissue work on all the scars. For me, that wasn’t such a big shock because I had a bit of that before, not for an injury, but just for my fitness. It’s long. It’s going to be a long process, but I go and do the work every day. I go three days, especially for the legs and two days for my upper body.

“The rehab probably won’t be done until three years from now. My goal is to get fit enough to jump back in a car by the end of this year, while still doing the rehab and probably again doing more surgeries.

“The timeline is to probably get the metal cage out in three to four months, then have one month of rest, until I can start weight bearing on this foot. That’s when we’ll really start doing the process of getting this foot back to normal and seeing if that’s going to even be possible.” 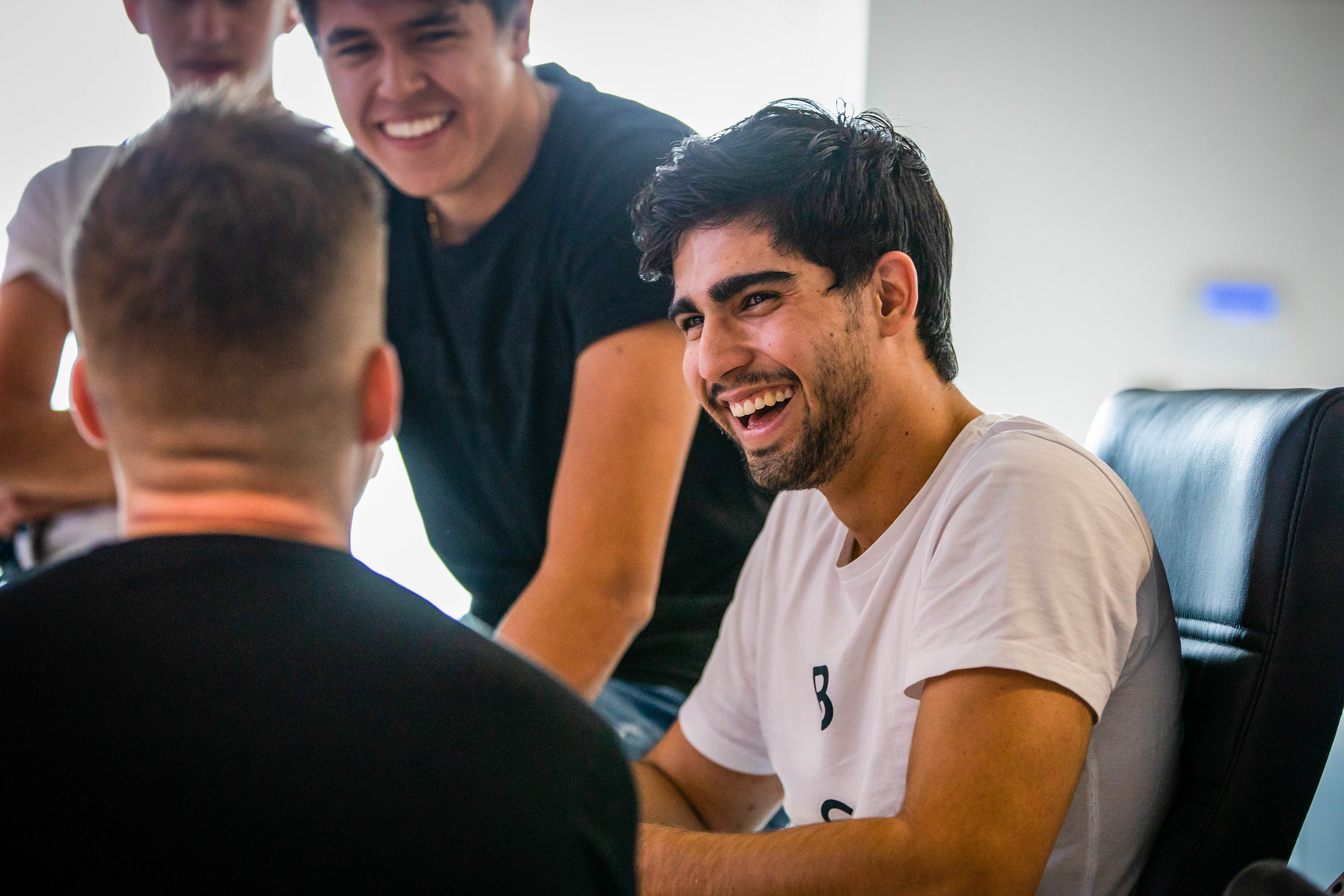 In addition to his work in the gym, Correa has discovered a newfound love of simulators to keep his competitive edge.

“Before the crash, I was never a big sim fan,” he said. “We do a lot of sim to learn the tracks we race on, but I never particularly enjoyed it. Anton [Stipinovich, founder of Allinsports Simulators] called me one day and he invited me here to try one of the sims [in Miami]. He asked if I could use the left foot, and I said, ‘I guess so.’

“We tried it; it didn’t go as bad as I thought it would be. It was obviously very hard and I decided to get a sim for my home. I’ve been training on it, and my brother has got into it as well. It’s just nice to be with the racing community here in South Florida.”

Using his left foot for both the brake and the throttle, Correa took part in the recent Miami’s Fastest Gamer simulator event – doing battle with the likes of Juan Pablo Montoya, Adrian Fernandez and Pietro Fittipaldi plus a host of top sim racers and local real-world drivers.

Despite all of his hardship, Correa has stayed connected to the racing community. Phone calls, hospital visits, sim races with fellow racers, and well-wishes on social media have come in spades. Throughout the pain, throughout the recovery, he’s stayed positive and stayed busy as he takes on every challenge that has been thrown at him.

“At the moment, it sounds weird, but I’m enjoying my life,” he said. “It’s a hard situation, but I think I’m making the best of it, and I’m seeing life from a different perspective. Not being in full-season preparation mode, being able to take things more easily, eat what I want, go out with friends, and so on.

“I think it’s important for people to know that are going through something similar—you have to keep yourself busy. You have to realise that this is just temporary and make the best out of the situation. I’m doing other projects, that are racing related, business things that I never got the chance to do before.

“It’s all a new challenge.”

His target at the end of his rehab? Not just any racing series, but to get back to Formula 2 or higher and compete at the level he was at before the accident.

“I want to get back for Formula 2,” he said. “I was in such a good place in my career and I was in the middle of a good rookie season last year. I don’t see why I can’t come back. I’m going to take the year off and learn and improve myself as a driver – even if I’m not racing there.

“I don’t see why I couldn’t come back and be competitive again once I’m 100% with my legs and my body.” 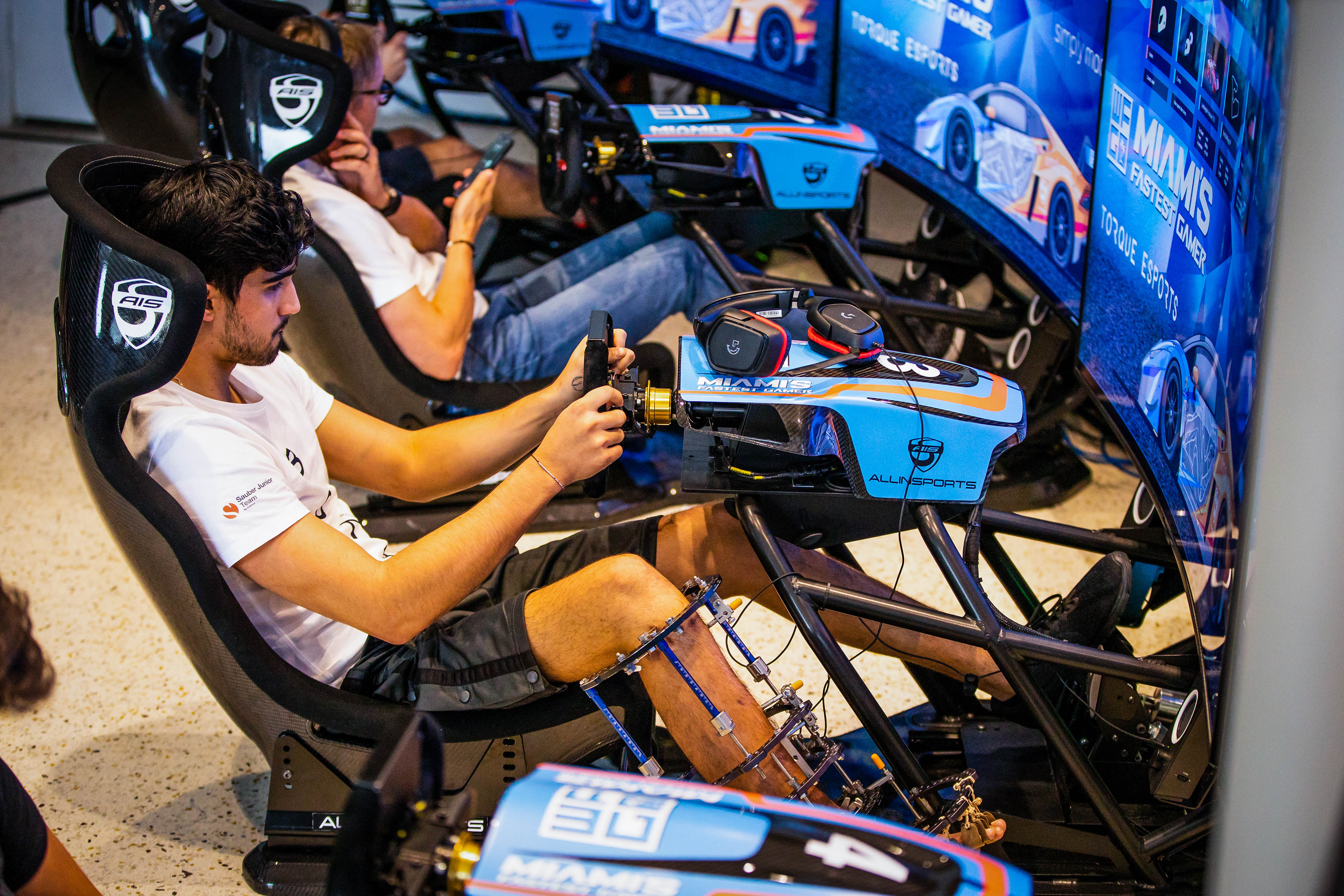