Formula 1 world champion Jenson Button is one of the many real world racing drivers who will be taking part in the SRO E-Sport GT Series.

Button – who won the 2018 Super GT Championship in Japan following the end of his F1 career with McLaren – will race in one of six McLaren 720S GT3 cars due to contest the Pro Series element of the championship, starting at Silverstone this weekend.

The 2009 F1 champion Button is also a part-owner in a team which was due to contest the GT World Challenge Europe series [formally Blancpain] in 2020, but Jenson Team Rocket RJN’s season was curtailed by the arrival of the coronavirus.

However, Jenson Team Rocket RJN will instead make its debut with Button in its car virtually, with GT regular Ben Barnicoat alongside in the squad’s second car.

Simracer and World’s Fastest Gamer winner James Baldwin will race for Button’s squad this year, in the GT World Challenge Endurance Championship, whenever the season gets underway.

Having made his proper esports introduction during this lockdown period, Button debuted briefly in the the Team Redline series won by Max Verstappen, before going on to compete regularly in The Race Legends Trophy where a host of ex-F1 drivers are fighting it out in McLaren M23s each week. 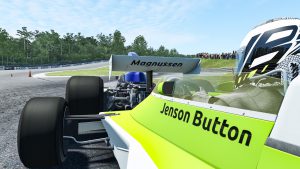 Mercedes driver Raffaele Marciello is one of the top GT drivers in the field, along with Bentley factory driver Jordan Pepper – who won this year’s Bathurst 12 Hours which was one of the last major races to take place before the current pandemic.

Both of Ferrari’s F1 Esports drivers Enzo Bonito and reigning F1 Esports champion David Tonizza (below) will be representing the team in this championship.

The third class of racers is the ‘Am Series’ which will have its field decided by a public hot-lap competition that runs from April 26 through to May 10.

A total of 11 different manufacturers will have cars on the grid for this five-race championship, with an additional grand finale race being held in June.

The Pro and Silver Series drivers will race around the same circuit on the same day, albeit in separate races.

However the grand finale event will feature the quickest drivers from all three series racing against one another in a single race.

The first Pro and Silver Series races will take place around Silverstone on Sunday April 26 at 13:45 CET and will be live streamed on the GTWorld YouTube channel.