Hany Alsabti and World’s Fastest Gamer Rudy van Buren took the spoils in the first round of the all new rFactor 2 GT Pro Series at Silverstone.

Drivers won their first slice of the €15,000 prize pool as money is awarded for who does the best at each round and not just for the top three drivers in the championship at the end of the season.

The sprint race – won by van Buren – was mostly clean although Alsabti did get his elbows out when going around Stowe at the end of the first lap to pass Kevin Ryan to move into 10th. This was a vital overtake because the starting grid for the main race is in the series is based on the finishing results of the main race with the top 10 positions reversed.

The biggest incident during the first race involved Joonas Raivio, who spun out at the high speed Copse corner when attempting to pass Jimi Nisula on the inside.

In the first race the two World’s Fastest Gamer finalists van Buren and Erhan Jajovski were the class of the field and took chequered flag only tenths away from each other but over four seconds ahead of Risto Kappet in third place.

The main race was action-packed with several major crashes and coming-togethers. The first incident happened seconds after the race got underway as Kappet and Petar Brljak collided into the slow speed Village corner, dropping themselves down to the bottom of the order.

That promoted van Buren up to seventh – which he soon turned into sixth as he passed fellow Team Redline driver Kevin van Dooren down the Wellington straight.

But his progress was reversed when he was battling for fifth with Williams Esports driver Nikodem Wisniewski. The two drivers both tried to make the apex for Club at the same time and came together.

As their cars spun around in the middle of the track Jajovski, who was following directly behind them, got caught up in the mayhem and he too ended up facing the wrong way. 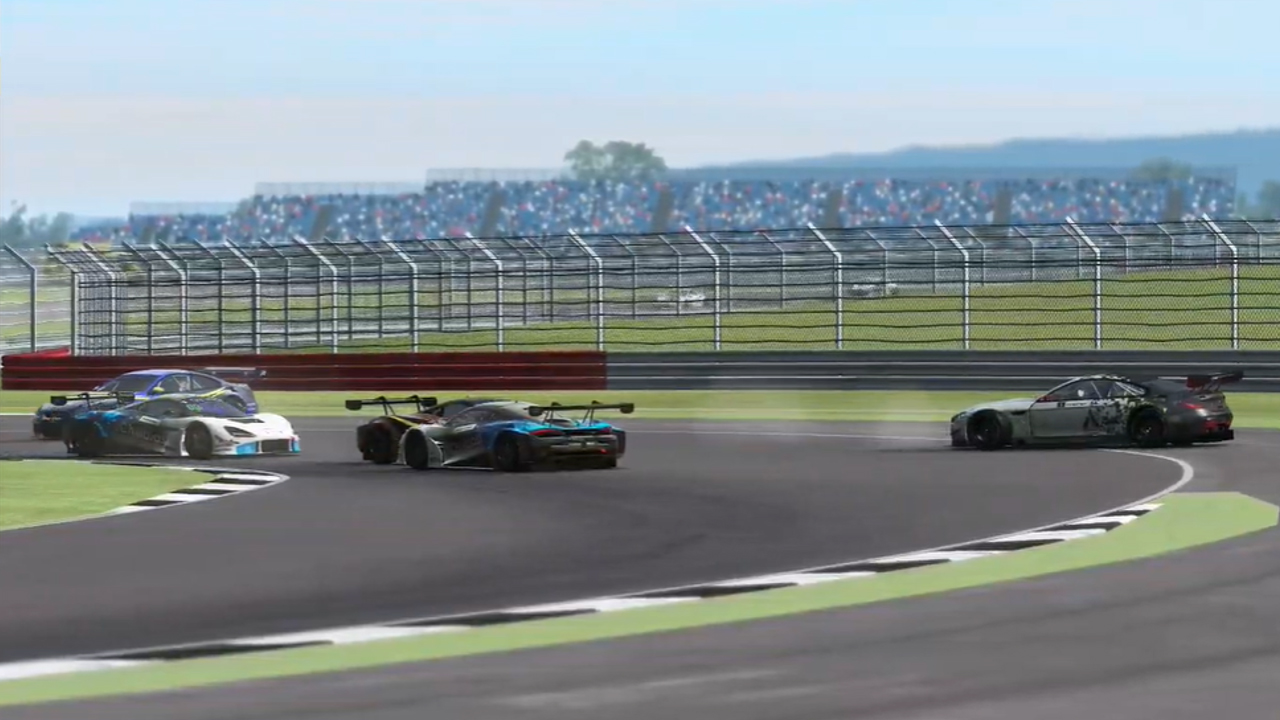 The result of that was van Buren fell down to 21st, Jajovski to 15th and Wisniewski to 27th and last of the runners.

Two of those drivers had astonishing recovery drives with Jajovski, in the final third of the race, pulling off two back-to-back manoeuvres at Stowe corner. First he passed Jimi Nisula for eighth and then he made it look easy when overtaking F1 Esports driver Joni Tormala on the next lap.

The top four drivers finished the main race where they started and Alsabti had a trouble free race. He established a clear lead early on and slowly extended that to win the race by about six seconds.

The front four all pulled away from the rest of the pack as Manuel Biancolilla in fifth didn’t have the pace to keep up, but he didn’t lose that position until there were less than 10 minutes of the race left to run.

Kuba Brzezinski was the first to successfully overtake Biancolilla but by the time he’d done it he was eight seconds behind the top four. Seconds later Jajovski followed him through to take his final finishing position of sixth.

Van Buren fought his way back up after his spin from 21st to 10th, albeit 23 seconds behind the race winner.

Red Bull Formula 1 driver Max Verstappen didn’t take part in this round and will also miss the second round in this six event championship.

You can watch back both races in full on The Race’s YouTube channel and you can watch the next GT Pro Series race live on March 16 for the Nurburgring round.

On March 9 you’ll be able to watch the first round of the feeder championship to the GT Pro Series, the GT Challenge Series which will again be streamed live on The Race’s YouTube channel.

Podcast: Why Abt’s prank is endemic of a wider problem

The second season of The Race All-Star Series draws to a close this weekend, with a title fight between Mercedes and Aston Martin on the cards

The Race All-Star Series Sim Masters championship draws to a close this weekend, with plenty of drivers still in contention for the title

Video: The full story of the Abt saga

What was intended as a joke in an esports race has had major real-world ramifications for Daniel Abt's career. Our video runs through how the scandal and its fallout unfolded