What's behind Espargaro's decision to self-censor? - The Race
Skip to content
MotoGP

What’s behind Espargaro’s decision to self-censor?

As the Aragon Grand Prix entered its 20th lap, Danilo Petrucci came across the start-finish line in 11th place. A sector later, he was suddenly down in 15th, having surrendered multiple seconds somewhere down the line.

The broadcast did not draw attention to it – understandably, given there was a thrilling fight for victory going on – but Petrucci’s sudden drop in positions was no mere mistake, at least according to the Italian.

“Unfortunately, three laps to go, Pol Espargaro hit me from the back,” Petrucci explained afterwards when asked by The Race about what happened.

“Turn 5. In the corner before, Brad Binder passed me, and I was trying to cross his line, but I just felt the bike of Pol touching my back and I fell from the bike. 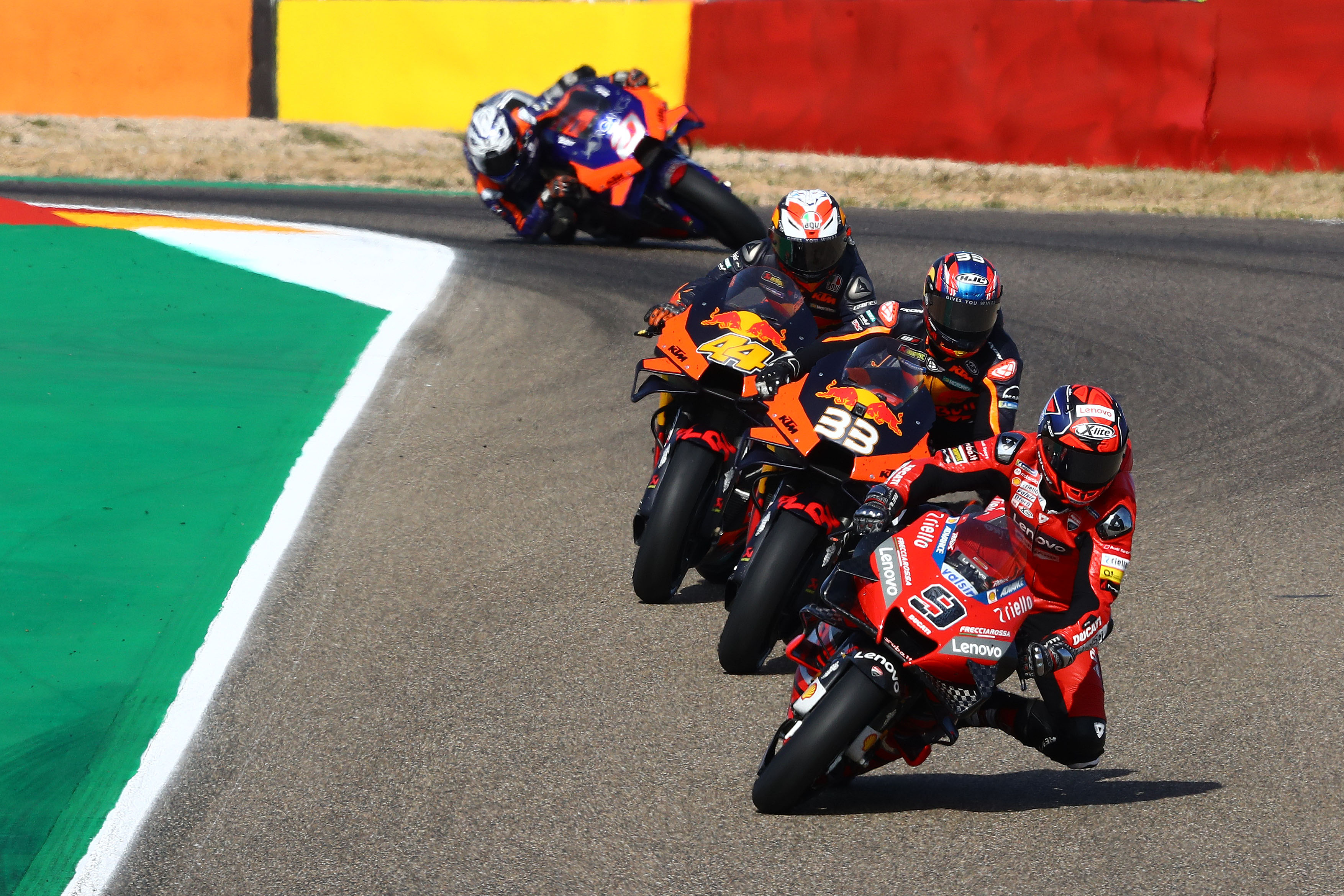 “Fortunately the run-off area is asphalt and I was able to stay up at least but I lost three positions unfortunately.”

Petrucci said he raised the issue with MotoGP race direction and believed they would be looking into it after the Red Bull Rookies Cup support race concluded. In the meantime, The Race took his statement to Espargaro himself, in an attempt to get his side of the story and shed further light on what was an unseen collision but one that sounded reasonably serious.

Espargaro’s response, however, did little to clear things up. 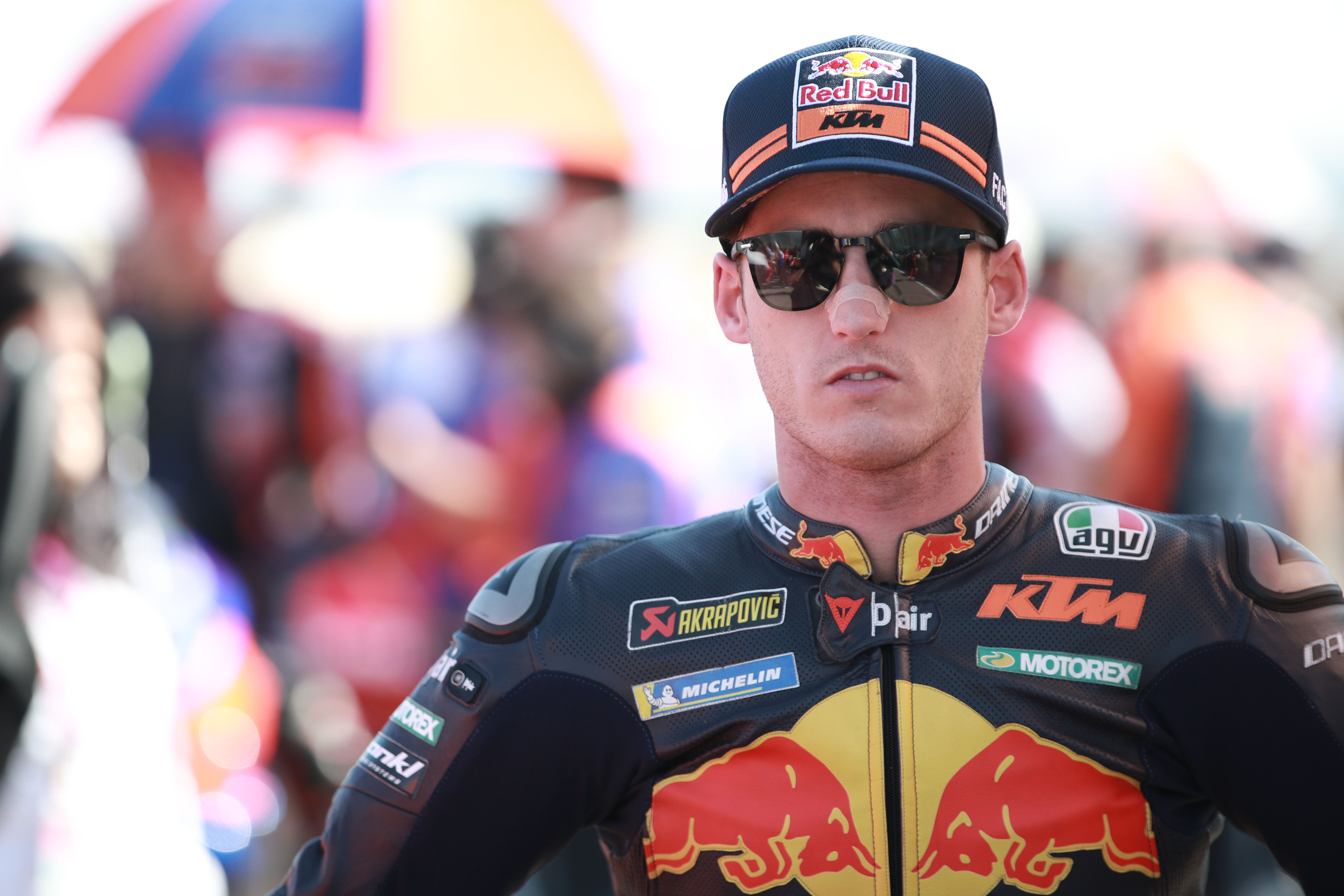 His approach was an unfortunate surprise. It was true that Espargaro did already outline his new policy the day before – when he was being asked about his collision with his brother and whether Alex Marquez’s cruising on the line was to blame, so perhaps it was wrong to expect an answer on this occasion – but equally, the Sunday matter was hardly a question about Petrucci.

But the reluctance to answer about this particular case was less disappointing than what it suggested going forward – which is that a clever, reliably eloquent and insightful rider was now going to self-censor.

Espargaro is very easy to like as a rider. He puts a lot of thought into his answers, doesn’t shy away from speaking at length and always imbues his words with emotion. In his time at KTM he has been an affable cheerleader for the project, even when it perhaps wasn’t moving forward as quickly as it was expected to be, before its massive progress of 2020. 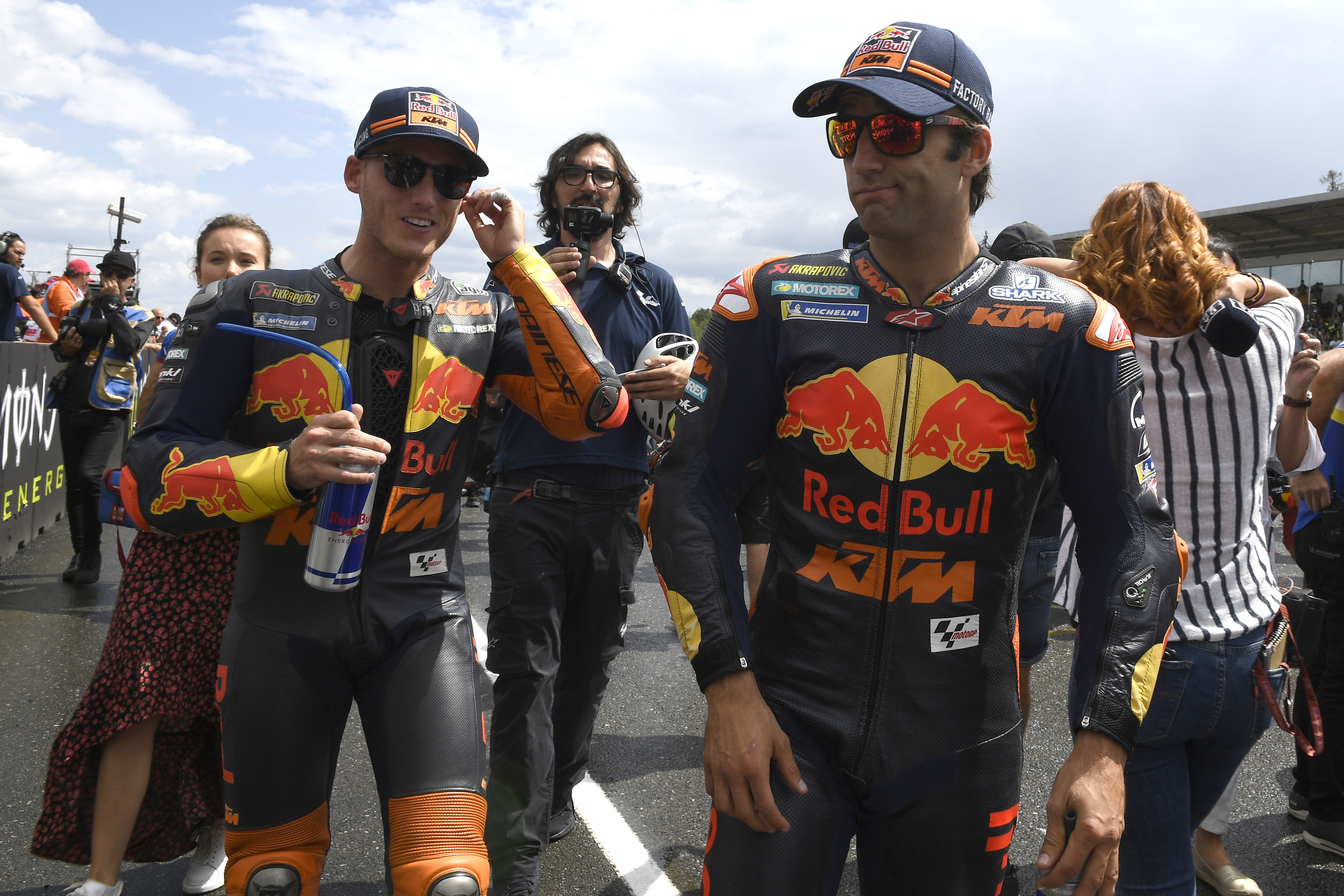 One of his most endearing and honest moments was when KTM signed Zarco to partner him – a rider whose stock was much higher at the time than Espargaro’s – and Pol had no issue discussing the possibility that Zarco would get more out of the KTM than he did.

Should that happen, Pol said, he would take pride in Zarco’s achievements and feel proud to have contributed to them. But it didn’t happen, of course – instead he blew a struggling, increasingly despondent Zarco (another affably honest and easy-to-like character) out of the water. 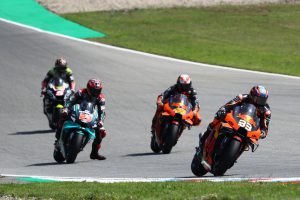 Espargaro is, of course, free to decide how much he is willing to discuss with the media, as is every rider. Their teams can have some say when it comes to their media duties, and many journalists will rightly feel that detailed communication with the press is a big part of the job, given that MotoGP is first and foremost entertainment.

But we’re all people still, and everyone understands that there’s a line as to how much any rider can be expected to divulge.

Espargaro alluded to getting into “trouble” over being misquoted. We at The Race would never knowingly misquote someone and take great care not to misrepresent what they’re saying, as I’m sure do the vast majority of our fellow publications, yet it’s also very true that sportsmen and the media often disagree when it comes to how statements are portrayed on the page. And for the likes of Espargaro and so many of his peers in MotoGP it is particularly complicated because English is not their native language, yet they are expected to wield it routinely and stand by every single word. 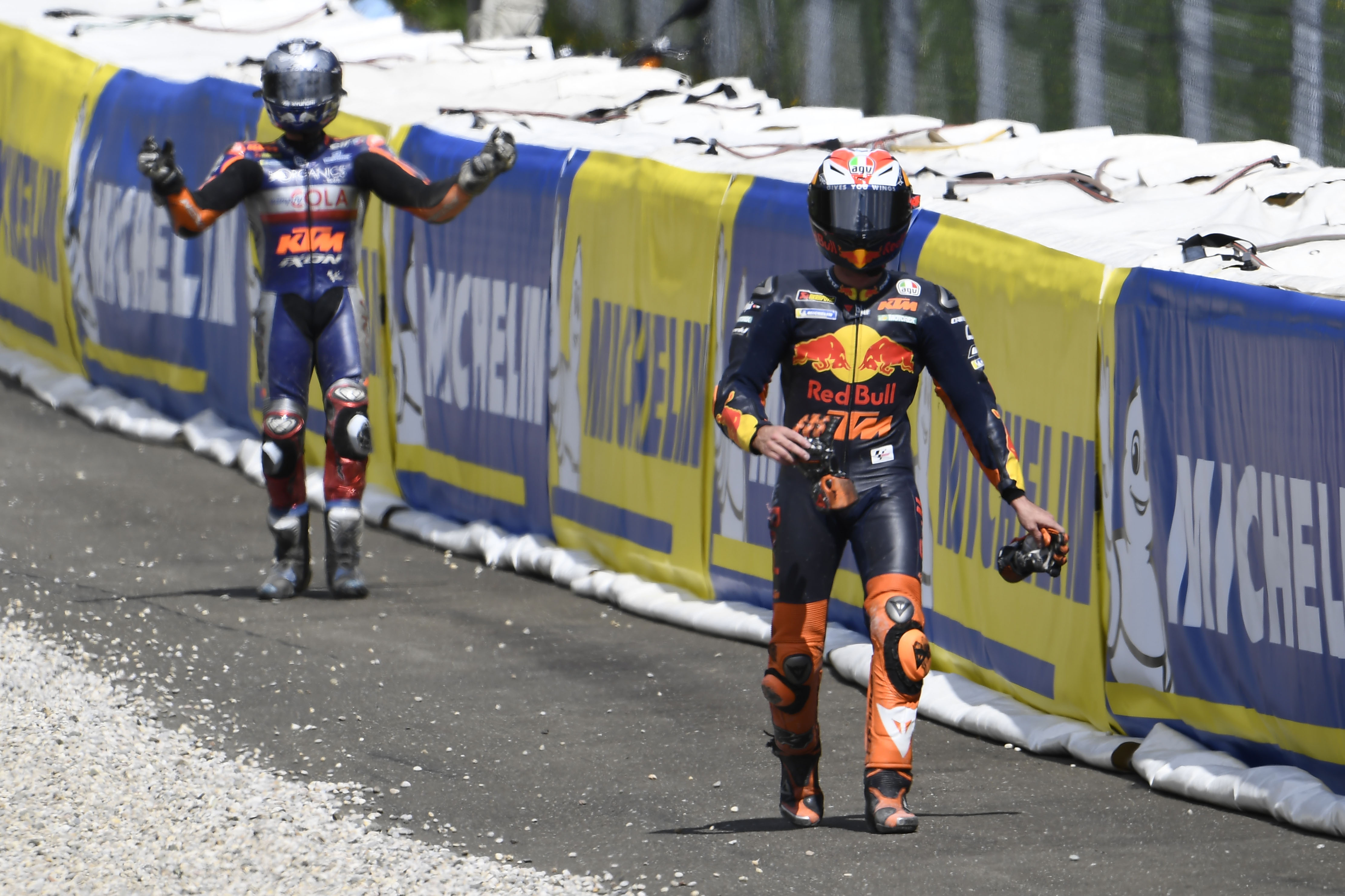 Espargaro did find himself in the occasional war of words this year. He took aim at Zarco after their collision at Brno and, after he took issue with a remark from KTM stablemate Miguel Oliveira (above left, behind Espargaro), spoke at length and quite harshly about the Portuguese rider – which in the end is believed to have been a topic of an intra-KTM meeting.

On the one hand, that was very much part of the entertainment of the 2020 season – conflict is an indelible part of sports, and sports media naturally gravitates towards that, especially right now when PR tends to have a tighter grip on proceedings and open conflict feels like a much starker departure from the status quo. On the other hand, it is very easy to see why a rider who’s been in the centre of some controversy this season already would be very keen to avoid further such instances – especially if he believes he’s been mistreated by the media.

Only Pol will know how long his moratorium on speaking about other riders is planned to go on – after all, MotoGP isn’t rallying, you share the track with a lot of people, and it tends to be hard not to speak about them. Social media activity suggests that this course of action may have its roots in Espargaro having received flak for a completely benign comment about Valentino Rossi earlier this month – but that might just be one piece of the puzzle.

It’s also clear that the particular Aragon weekend was chock full of disappointments for Espargaro. He was perturbed by a lack of action or feedback over the Saturday run-in with his brother and Marquez – “we get the same info as you [journalists], imagine how I feel” – and the race turned out very difficult.

And while seeing the Repsol-coloured Honda that he is due to ride next year on the podium in dry conditions for the first time this year should’ve cheered him up, he made it clear that was not the case when asked about it by The Race.

“No. Because next weekend I’m going to jump again on the KTM, and the feelings this weekend were not good,” he said. “So next weekend [at the same track] they don’t look much better.

“I will take Misano as a reference and Misano 1 has been very bad, Misano 2 we went onto the podium, because we had one day in between of testing. So here [at Aragon] we don’t have this day of testing to improve the problems and this is super painful. 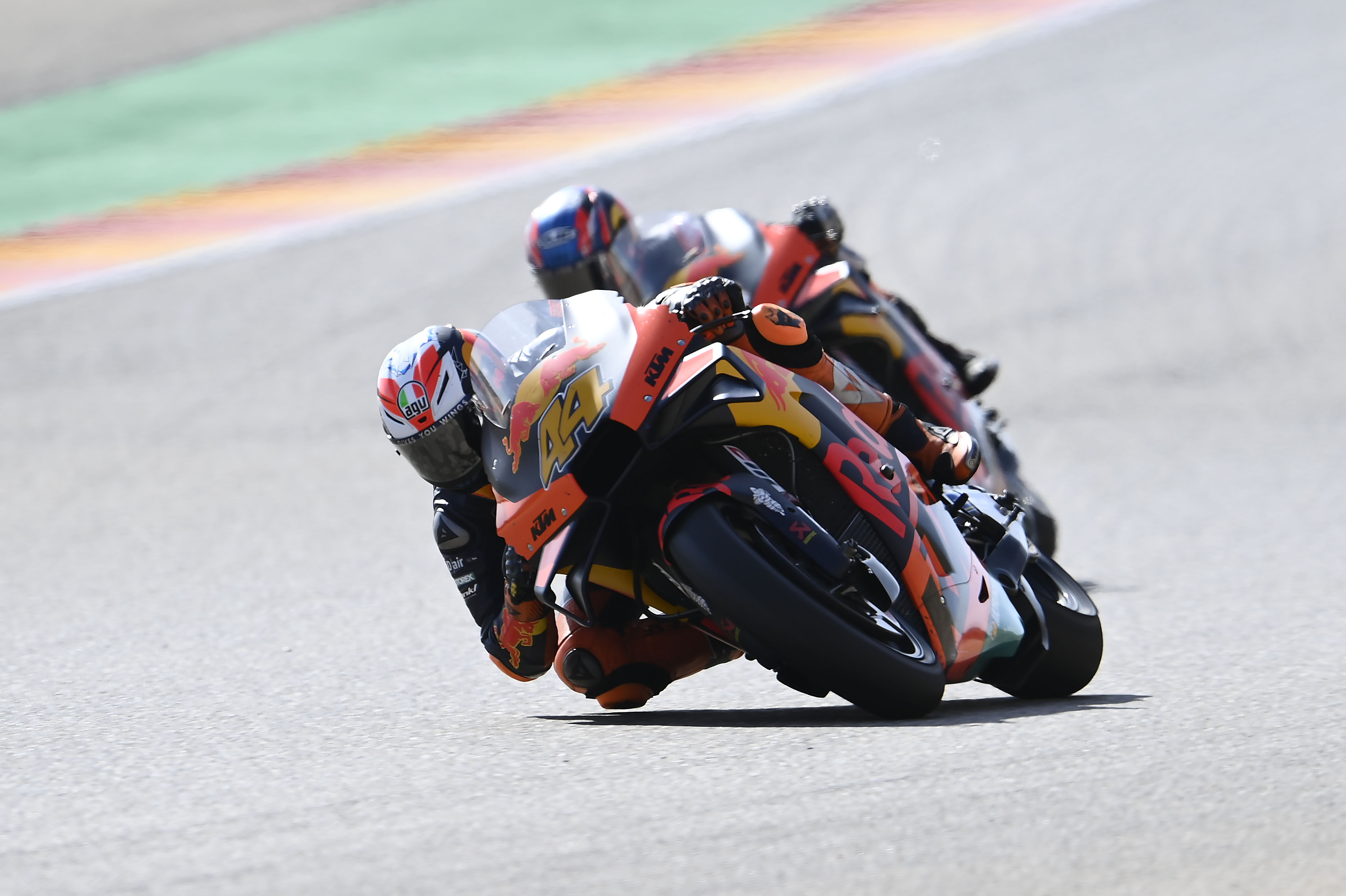 “So we really need to think deeply on the problems and improve them before jumping on the bike, and not jump on the bike with the same problems again.”

Perhaps there’s a tinge of disappointment that a chance to fight for the title in what is his final season with KTM looks to have vanished, and the chance to score a maiden victory on the RC16 looks increasingly remote. Those feelings will surely pass – whatever happens in these next races, his stint at KTM will be remembered as a net positive.

But Espargaro will also know that the 2021 switch to Honda alongside Marc Marquez will only bring with it more attention, more media and more questions about other riders.

And it’s very much a good thing, because Espargaro has always been interesting enough to warrant the biggest available platform – but it’s also difficult to see this new policy of his holding up in Repsol Honda colours.