Tech3 KTM’s two MotoGP riders, Danilo Petrucci and Iker Lecuona, have admitted that they both face an uncertain future, after the news was announced this week that Moto2 rider Remy Gardner would be stepping up to the premier class for 2022 – leaving one of them out of a ride and potentially out of the series.

Gardner has enjoyed a strong year in KTM’s feeder team in Moto2, missing out on the podium only once in six races in the middleweight class – and has done enough for KTM to put its faith in him for next season.

But with both Petrucci and Lecuona on one-year deals for 2021, it remains to be seen what the future holds for them.

“I have known the news of Remy for quite a long time, and I think it’s well-deserved,” said Petrucci. “He’s leading the Moto2 world championship, I think it was the natural way to switch to MotoGP. I think we’ve still not talked. We’ll wait until after this month, but I don’t know when they will decide.

“Sincerely I’m not scared about it, because it’s not me I have to decide. Maybe they will offer me a renewal of the contract, and I will decide, but at this moment I cannot decide anything. I can just go as fast as possible.”

However, aware that at 30 years of age losing out on his KTM deal might spell the end of his time in MotoGP (with a late lifeline from Aprilia looking increasingly unlikely), Petrucci was his usual philosophical self when weighing up his options for the future and considering his past.

“I know the situation perfectly. I have not so many regrets. I gave everything I had during this year. I arrived in MotoGP when I was 21, coming from the Superstock series. I did everything to stay here.

“It’s funny that since 2015 I’ve always got one-year contracts, and I always needed to renew them, instead of other riders that have multiple-year contracts. But I’m one of the oldest riders, and cannot be sad about leaving MotoGP. I always give everything I’ve got, and if it’s not enough, I am happy because I cannot do more.

“I have, let’s say, no talks with anyone. My future is in my hands because I can be faster, I want to be faster, and I know it’s possible but at the moment I’m struggling. I have just one target, to continue with KTM. If not, I don’t think I will go to Superbike. Sincerely, I didn’t even think about it.”

On the other side of the Tech3 garage, his team-mate Lecuona was left angrier about the media speculation about his future, as he continues to listen to what might happen without any idea of what the reality is right now. 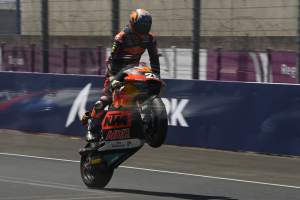 “I listen to a lot of rumours on my side, about my future, but honestly, I tell you, I don’t know – it’s bullshit, honestly,” Lecuona said. “Many people speak too much, like to speak. I just can tell you I do my maximum, race by race. I think in Jerez and the next races I improved a lot. I’m training a lot.

“It’s difficult to say, now my future. I don’t have anything with KTM, I don’t have any contract for next year. Just I want to put the focus on myself, with my performance, and continue to improve. I want to enjoy it, honestly.

“I need to say thanks to my family, to all my friends, because they pushed me and just for example my dad told me just I need to enjoy the MotoGP bike, enjoy day by day, like the first races. I don’t want to put any backpack on my shoulders, I want to ride, to enjoy, and we’ll see what happens in the next races.”

Lecuona did, however, also acknowledge that Gardner’s promotion was perfectly logical. “Remy did very good work this season. He’s fought a lot, he’s won, it’s normal KTM gives the opportunity to jump to the top class. Because he goes fast and he works very hard.”

Complicating matters even further is the continued success of KTM’s second Moto2 rider Raul Fernandez, with speculation also surrounding whether KTM wishes to move him too up to the premier class, forcing both Petrucci and Lecuona out of the Tech3 team.

Fernandez has enjoyed an incredible start to 2021 to win two of the first six races, and sits second only to Gardner in the championship standings, potentially adding another headache to KTM’s future plans.