The numbers tell the story pretty well in the second of Formula 1’s new-style one-hour practice sessions, the one held at dusk on the cooling Bahrain track, just as it will be in qualifying and the race.

The competitive pattern is quite similar to that seen in testing two weeks ago, with Red Bull out front, albeit not by as much.

“Yeah, it was OK,” said Max Verstappen but his smile betrayed the understated words after he’d headed both the single lap runs and been fastest in the race stint simulations.

Two weeks ago the RB16B’s advantage was in the order of 0.7s. Since then Mercedes has returned with a more benign set-up to tame the rear end, even though that did come at the expense of front end load in order to get a balance. 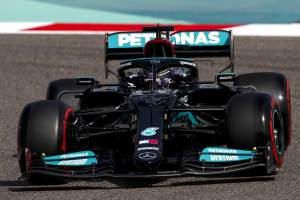 The car is still on something of a set up knife-edge but if kept within its apparently narrow window, it could be made to go pretty fast – as Lewis Hamilton showed with a lap just over 0.2s adrift of Verstappen’s session-topping time.

The Mercedes appeared to be giving its tyres a harder time over the lap, as when a comparison was made between the Verstappen and Hamilton laps, the Mercedes was absolutely even right up to Turn 13. But from that point on Verstappen was streaking away and the Mercedes was losing grip.

“It’s work in progress,” said Hamilton of the Mercedes. “It wasn’t where we wanted it to be. It’s looking better but not perfect.

“Just working as hard as we can, setting up wings and stuff. We still have a hill to climb. It’s all about stability – getting a stable car and making the tyres last and coping with the wind.”

It’s only practice and we don’t definitively know their respective fuel loads or what the difference in their Saturday-Sunday engine modes might be compared to Friday. If the fuel load difference was as it typically was last year, it would account for the missing 0.2s to Red Bull.

It might also be that Mercedes has something up its sleeve, with what is believed to be a super-cooling system within the inlet plenum for short bursts of extra power.

So if Hamilton can get within a couple of tenths when there are no technical tricks deployed, might he be able to contest pole? Very feasibly. 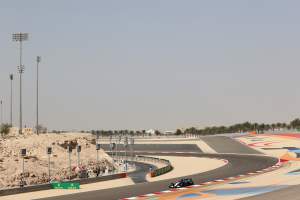 But make no mistake, the Mercedes W12 is currently a more difficult, less balanced car than the Red Bull RB16B around this Sakhir circuit. Valtteri Bottas described it as ‘undriveable’ over the radio after the team had left him out too long and the tyre degradation got out of control. Many of his laps were deleted for track limit infringements.

In the long runs, such as they were with time so restricted, Verstappen’s average advantage over Hamilton at eight laps on the medium tyres averaged out at that same two-tenths seen in the single lap pace.

Sergio Perez was around 0.4s off team-mate Verstappen over the long runs but didn’t get a great run on the single-lap qualifying simulation, so that 0.7s difference can be discarded.

Sitting in between Verstappen and Hamilton, with second-quickest time on the quali simulations, was Lando Norris’s McLaren-Mercedes.

It was very encouraging but Norris himself knew it meant less than it looked. He seemed a little crestfallen as he said, “Well, I think we can see we are going to have the same four cars ahead of us tomorrow. We showed our hand a bit more than them, but it’s not where we are.”

But if the McLaren was flattered in the single runs, it was much better than was apparent in the long runs and the car is clearly at or towards the front of that closely-bunched group behind Red Bull and Mercedes.

Vying with McLaren for that status would seem to be AlphaTauri and Ferrari, although with the usual provisos about the differing fuel levels each team tends to plan its practice runs around. 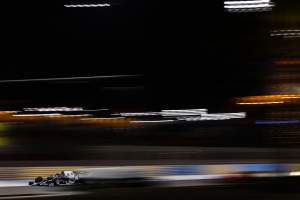 Yuki Tsunoda was remarkably quick and composed over his long-runs and put in the fourth-fastest average in the AlphaTauri, slightly quicker than team mate Pierre Gasly.

Ferrari’s Carlos Sainz completed a very long run with a respectable time and set a best lap on the low fuel runs only half-a-tenth adrift of Hamilton. But Mercedes typically runs this session in more conservative trim than Ferrari, so let’s see. Charles Leclerc was less happy with the balance of his car and trailed a long way behind Sainz in both short and long runs.

Aston Martin and Alpine were the dark horses coming into today, but there were no great pleasant surprises from either camp. As Mercedes admitted the new regulations seem to have hit the low-rake cars harder than the high-rake equivalents, is it possible that Aston Martin is now in the wrong camp? It seems to be around 0.7s adrift of Mercedes (about the same as last year) and with much the same stability problems.

Fernando Alonso found difficulty in getting the Alpine balanced between response and instability and there’s clearly lots of work to do there, as the car seemed very little quicker than the Alfa Romeo, though may well be fuelled heavier.

If we take a combination of the short and long runs in the tables, we can come up with a very approximate competitive order. It looks something like this:

That would give a field spread front to back of around 2.3s. Which compares quite closely with the 2.2s we saw in qualifying here last year.

The new-spec, downforce-restricted cars were, incidentally, around 4s adrift of the 2020 qualifying times, though we’d expect to see that significantly cut in qualifying itself.