Fernando Alonso has declared Alpine to be Formula 1’s “fifth team” behind Ferrari and McLaren based on its upturn of form during the past two race weekends.

Alpine had a slow start to the season with problems in the windtunnel over the winter blamed by executive director Marcin Budkowski for costing it a few weeks of development. That translated into a loss measured in tenths of a second given the rate of development to adapt to the modified floor regulations for 2021.

But after a difficult start to the season in Bahrain and at Imola, where Alpine was outside of the leading midfield group, it showed stronger form in Portugal and Spain. This led Alonso to declare Alpine has broken through as fifth best.

“So now let’s wait a couple of grands prix, but I think we can be the fifth team behind the Ferrari and McLaren. And this is good news because in the first two races, it was more difficult to be in Q3.”

Alpine’s qualifying results were particularly good in the Iberian double-header, with Esteban Ocon sixth on the grid in Portugal and fifth in Spain.

On both occasions he was disappointed not to be one place better off, having suffered a minor engine problem on his final run in Spain and putting together a scruffy lap in the best of the conditions on the first run in Q3 in Portugal.

Team-mate Alonso still has time to find but also reached Q3 in Spain, his second appearance in the top-10 shootout in qualifying after the Bahrain season opener.

But the scale of the transformation is shown by the deficit from the lead midfield car in qualifying, which has been a Ferrari at every race. Over the first two qualifying sessions in Bahrain and at Imola, the best Alpine was an average of just over half a second off. Across Portugal and Spain, that drops to less than half a tenth.

The slashing of the gap to around a tenth of what it was over the first two races is proof that Alpine really has elevated itself from scrapping with Aston Martins to reach Q3 to join that midfield-leading group, on recent evidence displacing AlphaTauri in the process.

Alpine’s performance level on Sunday is not quite as impressive and suggests that while it can fight with Ferrari and McLaren in qualifying, its natural level is snapping at their heels rather than defeating them.

Taking Spain as an example, Ocon lost two places at the start to run seventh in the first stint. He was behind Sergio Perez in the far quicker Red Bull, but Perez’s pace in the first stint was dictated by Daniel Ricciardo ahead. 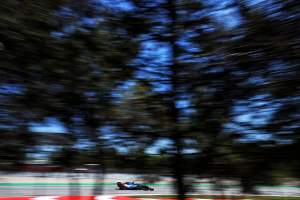 Is Alpine’s progress real or ‘too good to be true’?
Read more

He then lost a place to an undercut from Carlos Sainz and fell back from the Ferrari before committing to a difficult one-stop strategy that yielded ninth place by just two tenths of a second from Pierre Gasly.

“It’s been only two races that we’re seeing that trend, but I do think the car didn’t feel as good on Sunday in terms of pace compared to qualifying,” said Ocon after the Spanish GP.

“We’re struggling a little pit on pace compared to Charles and Daniel and Sainz. 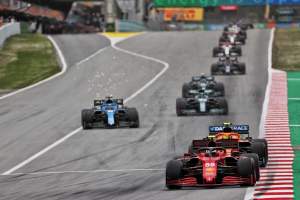 “We know the areas that we need to focus on, which is a bit more the race [pace].”

Alonso, who also attempted a one-stop strategy and was running 10th when he was shuffled out of the points before making a late second stop, agreed with Ocon’s estimate. But he admitted his own performance is still slightly limited by taking time to adapt to the car after limited pre-season testing.

“To be honest, I think in the race, it was even tighter than qualifying because it seems very, very similar in the performance of all the cars.

“The most important thing now is to get more performance out of the car from my side. And I think we have identified where are the areas we can exploit more performance, so we are working on that.”

While all 10 F1 teams are focused on ensuring their 2022 cars built to the new regulations benefit from as much development as possible, most are still bringing upgrades to their current cars.

That includes Alpine, which still has more improvements to come, including a tweak to the power steering on Alonso’s car that he hopes will give him better feel. But given the Alpine has performed well in slower corners in particular, that bodes well for the next race in Monaco.

Realistically, Alpine’s next objective should be proving decisively that it is F1’s fifth-best and capable of being ahead of AlphaTauri more often than not. If it does that and is able to hold onto what is currently a distant fifth place in the constructors’ championship, that means it should at least meet its minimum acceptable level for the season.

Then what really matters is the work going on the 2022 car in the background that the team hopes will make it a challenger for race wins.